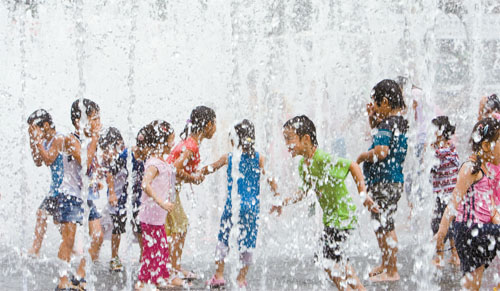 Children splash around in the fountain at Gwanghwamun Plaza in central Seoul. By Shin In-seop

The water fountain at Gwanghwamun Plaza in central Seoul opened a month ago and commemorates the achievements of Joseon Dynasty Admiral Yi Sun-sin, who led the Korean navy to victory against the Japanese invasions (1592-1598). It was named the 12.23 Fountain in honor of the 23 battles Yi fought with his 12 warships.

The water jets from the ground rise as high as 18 meters (59 feet) and are meant to symbolize the battles he fought on the sea.

However, not everyone is happy with the developments in Gwanghwamun Plaza. When the fountain was turned on, its profound meaning was eclipsed, some said, by the noise of children splashing around in it. It has, in essence, turned the heart of the city into a water park with families on outings and businesspeople on breaks stopping by for a shot of cool water.

This fact has evoked a number of different responses from the public, ranging from appreciation to criticism.

Complimenting the fountain, one person said, “It has become a place for citizens to enjoy.”

At the other end of the spectrum was another person who said, “It is inappropriate to turn a solemn place into a water park.” 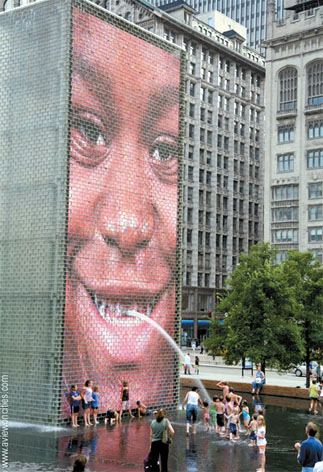 The Crown Fountain in Millennium Park in Chicago spurts its visitors. Provided by the Seoul Metropolitan Infrastructure Headquarters

Whether one agrees or not, there is no denying that fountains have changed the way cities and designers think about public art.

There is a broader trend in Korea and elsewhere toward the use of public art as a way to draw tourists and brand locations. And these days, fountains are emerging as a popular form of public art.

“The element of spectacle was already an integral part of public art and design,” said Park Sam-chul, head of the urban gallery team at the Seoul Design Foundation. “Now, user experience and a sense of community are the main themes driving public artworks. Fountains are no exception.”

One fountain that has built a connection with the public is the Crown Fountain in Millennium Park in the Loop in Chicago. Designed by Catalan artist Jaume Plensa, the fountain opened in July 2004. Its two 15-meter-high glass brick towers sit facing each other at opposite ends of a plaza with a black-granite reflecting pool in between, where visitors can splash about. The towers use light-emitting diodes to display video images of Chicago residents and nature scenes on their inward facing surfaces. Water emerges from a nozzle on the face of each tower, showering those below.

Without this interactive element, the structure is little more than two pillars. But add the people and the fountain truly becomes a work of public art.

Other fountains have also succeeded in turning the surrounding area into tourist attractions. The Bellagio Hotel in Las Vegas in the United States has a dancing fountain set in an artificial lake outside its facade. The hotel has become a place of interest in the city because of the fountain. 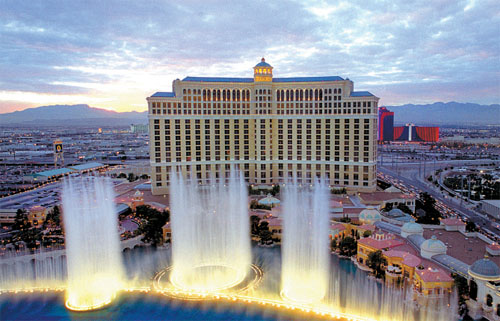 The Fountains of Bellagio at the Bellagio Hotel in Las Vegas dance to a variety of music.Provided by RainbowScape

The Dadaepo Sunset Dream Fountain at Daedaepo Beach in Busan, which opened in June, has been credited for the increasing attendance at the beach. With the long monsoon season and relatively low temperatures this summer, the number of visitors to seven beaches in Busan dropped 18.6 percent from a year ago. But Daedaepo Beach saw its attendance numbers rise. In fact, the number of visitors to the beach tripled this year, from last.

The Moonlight Rainbow Fountain installed along the Banpo Bridge on the Han River in Seoul was intended as a tourist attraction.

“The fountain was built as a tourist attraction on the assumption that Seoul’s future lies in tourism,” said Bae Min-ho, a manager at the Seoul Metropolitan Infrastructure Headquarters. 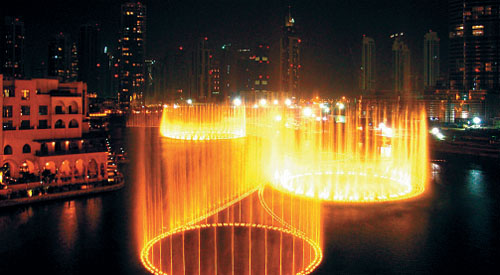 The Dubai Fountain in the Burj Dubai Lake in the United Arab Emirates is the biggest fountain in the world, with water jets that rise as high as 152 meters in the air.

The fountain, which began operating in April, is listed as “the longest bridge fountain” in the world by the Guinness World Records. It has already become a promotional tool for the city, according to Bae, citing the clips of it that have been posted to YouTube.

This is considered one form of place marketing, which employs marketing principles and techniques to increase the appeal of places including towns, cities and countries. What is most important in place marketing is finding a way to express the qualities that differentiate one place from the rest. 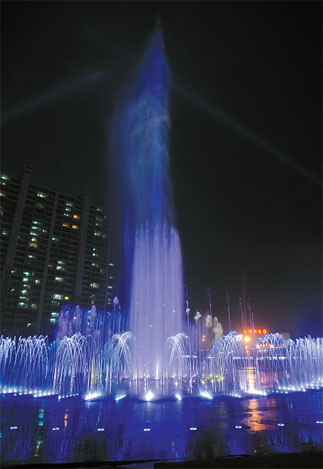 The Dadaepo Sunset Dream Fountain in Dadaepo Beach in Busan lights up the city. Provided by Busan Saha District Office

However, there are concerns that building too many fountains could diminish their ability to draw tourists. It is worrisome to some that a number of regional governments in Korea are now busy building fountains.

And there is nothing ordinary about them. Fountains that can only spout water are considered old school. The ones being built these days usually come with elaborate lights and music.

The Music Fountain in Lake Park, Ilsan District, Goyang, Gyeonggi, also goes beyond the ordinary, spurting water according to a pre-programmed melody. The fountain can form 35 basic shapes and 500 different patterns created by 1,655 nozzles. Spectators can even ask for a specific song at the Web site (www.gys.or.kr) and the operator picks a new song once a month and creates a show for it.

One of the most popular types is the pop-jet fountain. The device uses an underground pond. The water flows from there without exposing the piping or wiring, which means the fountain space can be used for other purposes in the winter. The Seoul and Gwanghwamun plaza fountains are examples of this type of fountain.

Still, the pop-jet fountain isn’t perfect. The water contained in the underground pond comes out of the ground and goes back down into the pond. During that process, contaminated materials on the soles of shoes can mix with the water and spurt into the air, where it can be swallowed. There are still no hygiene standards for pop-jet fountains.

RainbowScape Co., which specializes in building fountains, however, says that pop-jet fountains are safe.

“The pop-jet fountains built recently are equipped with devices that eliminate bacteria so there is nothing to worry about,” said Jeong Gyeong-ah, a manager at RainbowScape.