Girls just want to have fun and profit

Girls just want to have fun and profit

Girls’ Generation was one of the first in the new wave of girl groups, debuting in 2007. [YONHAP]

They’re young and leggy, their music’s light and perky, and their dance moves are easy to learn. And there are enough of them to please even the pickiest fan.

Girls’ Generation, Wonder Girls, 2NE1, KARA, After School, 4Minutes - girl groups are all over the Korean pop music scene. Never has the industry, long dominated by boy bands, experienced such “girl power” before.

“In the past, one or two similar bands won fans and massive popularity, while the rest disappeared quietly after a month or two. What we are experiencing is a brand new phenomenon in which several girl bands are sharing fans and popularity among themselves,” says culture critic Kim Hong-in.

Since their debut in 2007, the nine-member group Girls’ Generation has dominated the music industry with one hit after another. “Gee” topped local music charts for nearly 10 consecutive weeks earlier this year, an unprecedented number for a female pop group. The members, all aged 18 to 20, claim female and male fans of all ages, from teens to people in their 50s.

But these girls have plenty of rivals. The Wonder Girls have been on the scene since the same year and recently debuted in the United States. Releasing an English version of their hit song “Nobody” in June, the five-member band has won the chance to open for the U.S. group the Jonas Brothers on a concert tour. 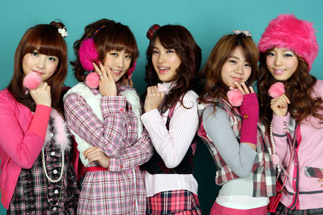 Others have since jumped into the market and are climbing fast and trying to set themselves apart. After School, as the name implies, has a schoolgirl image, while 2NE1 brings hip-hop into the mix.

Korea has had popular girl bands before, with S.E.S and Fin.K.L, who duked it out in a 1990s proxy war between two major talent firms here, considered the pioneers of the scene. They led to the coining of the phrase “nuna budae,” referring to the throngs of male fans who followed their idols everywhere.

These early girl bands were limited in concept to either “sexy” or “innocent.” Such limitations meant they eventually wore out their welcome as both the band members and their fans grew older, and members had to turn to acting, emceeing and other areas of entertainment.

New girl groups, however, aren’t waiting until the end of their musical heyday to go multimedia. They appear in TV dramas, movies and variety talk shows soon after their debuts, doing comedy skits and some serious acting at the same time, approaching their fans in literally every venue possible.

“I was a huge fan of Fin.K.L back in high school and still believe no band can be as pretty and cute as they were,” said Yoon Suk-won, a 30-year-old office worker. “But I somehow feel much closer and affectionate toward the new girl groups because I get to see them so often on television. They seem much more open and funny.” 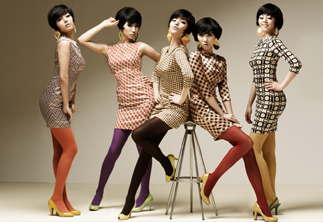 Another unique trend is the expansion of the market for girl bands to a broad range of ages, media critic Lee Chan-ho says.

“Girl bands may be for boys, but movie stars and show hosts can be idolized by much older men,” he said. “The broad range of fans will be a future asset for the girl bands, as it will guarantee them longer popularity.”

Of course it takes more than talent. Behind these young women are entertainment powerhouses who pour money into total makeovers and train them to become “multi-entertainers” long before their debuts.

Yuna, a vocalist in Girls’ Generation, for instance, took acting, singing and dancing lessons years before her debut. She landed the lead role in a daytime TV drama last year.

Son Dambi, a solo singer who released a digital single with After School, also took acting lessons for almost four years before making her debut on the primetime TV drama “Dream.”

“These days, singers can no longer just rely on their popularity in the music market to make their way into different entertainment sectors. They need real talent, effort and preparation,” says Chung Hae-chang, Son’s agent.

The expansion of the digital music market is considered another contributing factor to the popularity of girl bands.

Their fans - mostly teenage boys - are usually much less willing to open their wallets to buy their idols’ albums or concert tickets compared to girl fans. But with the expansion of the more moderately priced digital music market, an increasing number of people willingly spend money buying songs, making girl bands the equal of boy groups in terms of profit.

“Because idol groups rely on digital single albums now, it takes them a lot less time to create an album and provides them with more opportunities to appear on television and train in other skills,” says culture critic Kim. “The market situation is one of the main contributors to the prevalence of girl bands.” 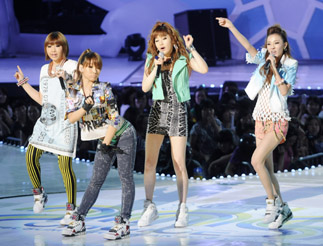 “Boys and men have long waited for new girl groups they can love and adore. I’m sure many have wondered, ‘How come there are only boy bands, and girls get to have all the fun?’

“It is still too early to say this ‘renaissance’ of girl bands will continue in the fleeting music market,” he adds. “One thing is for sure: These girl groups must maintain their originality and come up with new concepts at the same time to keep fans interested.” Yonhap