The plight of South Korean POWs

The plight of South Korean POWs 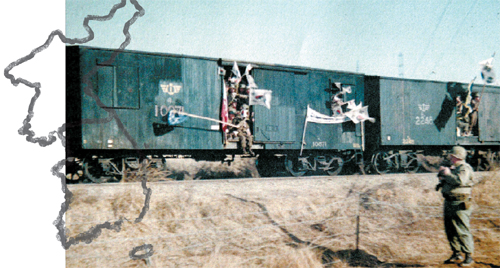 A train carries recently released South Korean prisoners of war from the North to the South in 1953.[YONHAP]

These days, few South Koreans, if any, feel uneasy about the fact their country does not have a peace treaty with North Korea to follow the cease-fire that ended the 1950-53 Korean War. For the average South Korean, news about the North’s nuclear and missile tests is subsumed by the practicalities of living in an industrialized nation that is busy trying to thrust itself into the upper ranks of the advanced nations of the world.

This state of relative calm has also diluted what was once a sense of urgency about the fate of South Korean prisoners of war, the majority of whom are still being held in the North. While the trickle of North Korean defectors became commonplace here long ago, with around 16,000 defectors in Korea at present, the plight of the POWs gained attention only after Cho Chang-ho, a second lieutenant in an artillery unit at the time of his capture by Chinese forces, made it home in 1994. Since then, 79 former South Korean soldiers have made it back home. Of them, 16 have died because of age and other factors.

Earlier this week, when the South Korean government submitted a list of family members for participation in an inter-Korean reunion event later this month, Seoul asked Pyongyang to reveal the whereabouts of 20 POWs and abductees, as it does every time a reunion event is held. Pyongyang has so far refused to verify the whereabouts of any South Korean POWs, for reasons that seem largely to be political.


Exploitation and life in the South

For the few former POWs who do make the dangerous journey to the South, life outside of the North’s gulag, where most POWs spend their lives doing hard labor, is often a far cry from the dreams of the South they have been holding onto for so many years.

Upon their arrival in the South, many are exploited by the brokers who arranged for their passage out of the North, usually through China or another country. These people promise to get their families into the South or to deliver money to family members still in the North, but often run off with the money instead.

Han Gil-su, 80, is a former prisoner of war who escaped from the Musan coal mine in North Hamgyong Province in 2002. 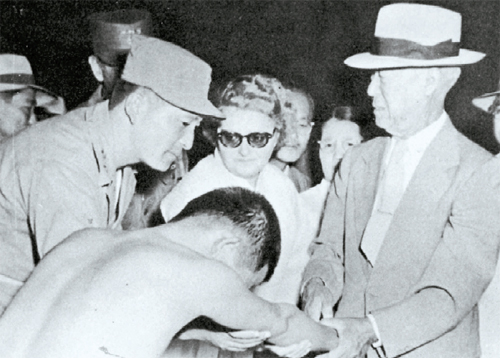 Former President Syngman Rhee greets a former Korean POW who had just returned to the South in 1953.[JoongAng Ilbo]

“One day, a broker approached me. He already knew that I was a POW. He asked whether I wanted to see my family in the South,” said Han. “So I went with him.”

The problems began after his arrival in the South. He kept getting calls from the broker, who said he had also smuggled Han’s wife to China. Han paid 20 million ($16,000) to arrange for her to come to Seoul, but the safe house in China where she was staying was raided by Chinese security forces and she was sent back to the North. Han later heard that she had died in a labor camp.

This did not deter Han from trying to aid other members of his family who remained in the North. He sent more money to the broker, but never saw any of his family members and he is fairly certain that they never received any of the money he sent.

Meanwhile, Han’s Southern relatives kept borrowing money from him, but they rarely paid him back.

Out of the 450 million won Han has received in government aid, he has just 100 million won tucked away in a bank account, in addition to the monthly stipend of 1.3 million won that he gets from the government. 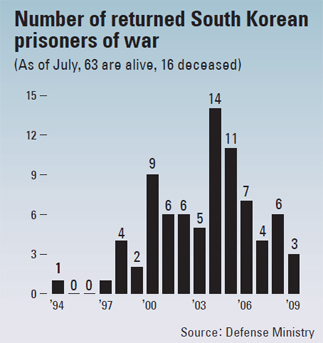 Each POW receives a one-time payment of at least 120 million won as well as a pension from the government. The amount they receive depends on the time they spent in captivity their rank at the time of capture.

For Han, the only solution is unification, something that is unlikely to happen anytime soon, given the reluctance of neighboring countries to take on the burden of a North Korea that has collapsed.

“I have given up hope and worry only about the safety of my family. I will only see them again when the country is unified,” he said.

Like Han, many former POWs have problems adjusting to life in the South. In recognition of this, the Defense Ministry now offers classes on basic finance and legal issues. Begun in November 2008, the classes are free and run for two months.

But Lee Yeon-sun, an official with the POW Family Organization, says that this is a case of too little, too late.

“We conducted a survey of former POWs and 70 to 80 percent said they had been the victims of some form of embezzlement or had their settlement money stolen,” said Lee. 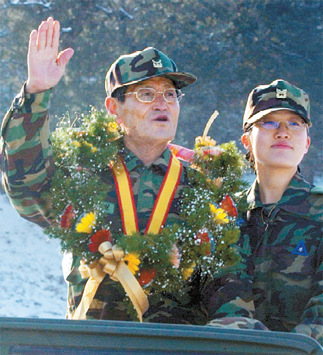 A former South Korean prisoner of war celebrates his return to South Korea in Gangwon.

For people like Yeom Su-geun, there are other problems. During the war, Yeom fought in Gangwon Province. During one battle, his foxhole collapsed on him and he hurt his spine, which was when he was taken prisoner. He said that even as a prisoner he had received treatment at a field hospital run by the Chinese military. Upon returning to the South in 2001, however, he sought compensation for his disability but the government turned him down for lack of proof. Veterans applying for compensation are required to supply medical records or physical evidence such as grenade shrapnel or bullets still in the body as proof of their injuries.

“I thought about suing the government but that takes too much money. I just gave up. It’s impossible to dig up the records of a Chinese field hospital that existed 50 years ago,” Yeom said.

The repatriation of South Korean prisoners of war has always been taboo in the North, even during previous administrations when inter-Korean relations were operating smoothly.

Whenever asked, Pyongyang has been defiant in stating that any South Koreans still in the North have chosen to stay there, meaning there were no South Korean prisoners of war. Banging its head against such propaganda for the decades since the end of the Korean War, Seoul has tried to resolve the issue with a low-key approach, hoping to increase its chances of bringing the aging prisoners home by not agitating the North.

Currently, venues such as the sporadic Red Cross meetings or inter-Korean talks are the best way for any kind of reunions between POWs and their family members in the South. A small number of South Korean prisoners of war are sometimes allowed to see their families as part of large family reunion events, the last of which took place in November 2007, but any official reference to them is generally avoided by both Koreas. 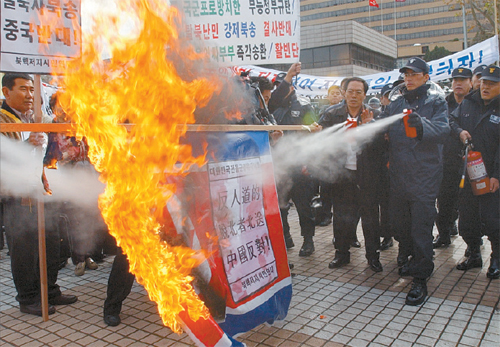 Civic groups demonstrate in front of the Defense Ministry, urging the government to take stronger steps to demand the return of South Korean POWs.

Still, officials from the Foreign Ministry, the Defense Ministry and the National Intelligence Service will admit that the government does assist families looking for their loved ones. Currently, the government provides up to 30 million won to families who need to pay off brokers. The money is later deducted from the funds the POWs receive to assist them with resettling in the South.

This policy has been implemented in recent years as more North Korean defectors in China are repatriated to the North. A foreign ministry official speaking on condition of anonymity said that some of the safe houses in China exist as a result of a mutual agreement between the South Korean government and Chinese authorities.

“They are usually safe from security forces because the agreement gets the Chinese out of awkward situations,” said the official. “North Korean defectors can maintain a low profile there until safe passage is arranged, instead of having to climb over the walls of the embassy or getting caught. It’s less embarrassing for Beijing.”

Civic groups and conservative political elements here have long argued that the government needs to adopt a tougher stance on the issue, as well as get something in return for the massive amount of rice and fertilizer aid that has been flowing from South to North.

The Lee Myung-bak administration, which came to office promising a more conservative approach to inter-Korean relations, has said that aid would flow to the North only if there were tangible improvements in its aid distribution system and only if Pyongyang gives up its nuclear ambitions.

But analysts say that on political matters such as the POW issue, Pyongyang rarely deviates from its stance. For instance, the North has stood firm on its refusal to allow Seoul to conduct an investigation into the shooting death of a South Korean tourist at the North’s Mount Kumgang resort last year. That incident served as a catalyst for the further deterioration of inter-Korean relations. Given the North’s track record, analysts say it is extremely hard to resolve the issue.

“Only a political decision by Kim Jong-il could bring about the release of the prisoners,” said Koh Yu-hwan, a North Korea specialist at Dongguk University. “Releasing them would go against everything the North has said publicly on the issue and would mean it has broken international law. That is just too great a risk.”

The only time Pyongyang has made an exception to its policy was in 2002 when North Korean leader Kim Jong-il apologized to then Japanese Prime Minister Junichiro Koizumi for the North’s kidnapping of Japanese citizens in the 1960s and ’70s for spy training purposes. It was believed that the North was hoping to normalize bilateral relations with Japan, but the move backfired when the remnants of the abductees returned to Tokyo by Pyongyang were scrutinized and Tokyo argued that the remnants didn’t belong to the people the North had claimed they belonged to. Japan has so far refused to share the burden of providing heavy fuel oil to the North, as is warranted under the agreement struck within the six-party framework in 2007, in exchange for progress in the nuclear negotiations that are now stalled again, saying it first wants the abductee issue resolved to its satisfaction.

To this date, estimates on the remaining number of Korean prisoners of war in the North are shaky and differ depending on the source. Prisoner exchanges in the aftermath of the Korean War saw tens of thousands of North Koreans and Chinese heading back to the North and China, while Pyongyang returned a total of 13,469 prisoners, including 8,343 South Korean soldiers. At the time, the United Nations estimated that as many as 82,318 prisoners were still in the North, including missing UN personnel, while official documents from China put the number at 46,823. During the war, North Korea estimated the number of captured prisoners at 65,000, a claim largely thought to be inflated for use as propaganda.
Nevertheless, the Defense Ministry estimates that 560 POWs are still being held in the North.