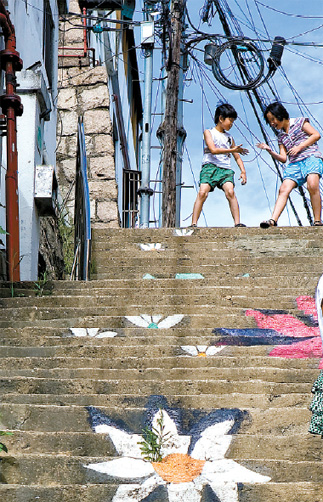 Flowers bloom and birds fly on the stairs in Ihwa-dong, central Seoul. By Kwon Hyuk-jae

No one knows for sure when the paintings first showed up on the village walls. But suddenly, there they were. In some villages, painters from out of town would come and walk up the winding streets with their brushes. In others, the locals became the artists, streaking the walls with fresh paint.

An abandoned mining town in Gangwon Province, a slum in the middle of a big city, a seaside village on the western sea border, even a small city on the eastern coast with an atomic power plant - all of these spaces have become canvases for these artists.

In one place, the crack on a wall has been transformed into a wrinkle on a smiling woman’s face. In another, dandelions are drawn on flowerpots that have been carelessly discarded on the sidewalk. Elsewhere, a telephone pole becomes the backdrop for a painting of a child bursting into tears.

The younger generation left these villages long ago, leaving only the elderly, many of whom have nowhere else to go. These are like ghost towns, deserted and desolate.

But people are starting to return. Visitors coming from far away are strangely drawn to the paintings, the people and the sense of community that has begun to develop there again.

These works of art have been created as part of a series of public art projects that have sprung up around the country in recent years, most in low-income areas or towns that time forgot. The projects aim to beautify once old and crumbling walls or bring buildings back to life. Some are funded by city, regional or state governments, but others have been initiated by neighborhood residents themselves as a way to reconnect with their community and draw visitors to their towns.

Some of these projects can be seen in and around the capital region. The Ihwa-dong Naksan Project, was one such project completed in 2006 in Iwha-dong and Dongsung-dong near Daehangno in central Seoul. It had approximately 70 people painting the stone fences, stairs and walking paths of the neighborhood. The professional artists and students who participated in the project painted one wall of the neighborhood police station with white eagles and the Rose of Sharon, the Korean national flower. One house there now bears the image of Mount Naksan as a result of their work.

The project is just one of many being sponsored by the Ministry of Culture, Sports and Tourism, which says it initiated the public art projects to “help decrease socioeconomic polarization and create a new model for public art.”

Meanwhile, the Seoul city government launched the City Gallery project in 2007. The site-specific installations placed all around the city are already turning the capital into a living museum. The city announced last year it would support 26 public art projects through 2010. Three projects will be completed by the end of this month - at three schools in the Nowon and Gwanak districts; in Sky Park in Sangam-dong, Mapo District; and at several parks in Nangok-dong and Nanhyang-dong, Gwanak District.

Of the other projects currently in process, one will put a mural in the tunnel connected to the annex of the former intelligence agency on Mount Namsan, another will decorate the walls of the underground passage leading to the Yongsan electronics market.

Meanwhile, civilians are also organizing similar projects on their own. Gaemi Village, a depressed neighborhood in Hongje-dong, Seodaemun District, became something of an art haven after 120 art students from five different universities around the city worked together to paint the walls late last month.

To get a sense of the art on the village walls outside of Seoul, we traveled around the country this week in search of the villages that are starting to become tourist attractions.

The paintings we found are not magnificent works of art. The wall paintings in the villages, like each and every resident we encountered, are all different. The only thing they have in common is the mark of life. Each one seems still to vibrate with the life of its creator, but none of these people are artists by trade. They are people that have been forced to live in slums, forced out of their homes because of redevelopment projects, and people who couldn’t find a place to go after a mine shut down.

When we visited Suam-gol in Cheongju, North Chungcheong, where the average population is over 60 years old, an elderly man we met handed us a cool can of coffee. Of the village’s 120 residents, most are recipients of the National Basic Livelihood Security Program. The village, which feels deserted during the week, springs to life on the weekends with an influx of young visitors from all over the nation. The village’s elderly residents don’t seem bothered by this, even when strangers come up to them with cameras asking for pictures. 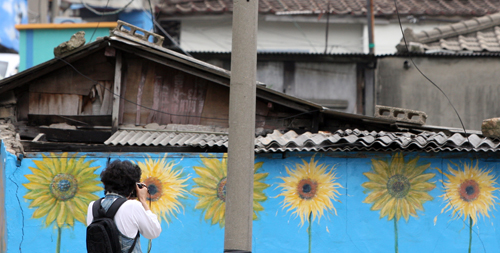 A woman stops to take a picture of the artwork on a wall in Gaemi Village earlier this month. The village experienced a revival when 120 students volunteered to paint murals on the walls, which increased the number of visitors to the village. The community art project is part of a series of similar initiatives around the country. [YONHAP]

“We’re rather thankful,” said the kind man who had given us coffee. “It was empty around here without any children. Now we have all these young people coming to see us every day.”


Here are a few places where community art projects are giving new life to old villages around the country:

In 2006, about 70 artists covered the walls and streets with paintings and installation art. The steep stairs and narrow walls are covered with colorful flowers and bright birds. Strolling through the maze-like neighborhood searching for the hidden wall paintings is like walking back time.

The City Gallery Project came to this neighborhood in 2007, when artists painted the walls of a five-story building that houses 700 shops selling clothing and accessories.

Many of the works are built around images of the buttons and spangles on sale in the stores. The roof garden was decorated to resemble the home of a giant who is an avid button and fashion accessories collector, and the buttons and zippers that the giant collects are turned into chairs for the building’s human visitors.

Dongdaemun Station, line No. 4, exit 8. The building is next to Dongdaemun Pyeonghwa Market and behind the Doota shopping center.

The hillside village of Dongpirang, which clings to the fringes of Tongyeong, South Gyeongsang, consists of around 50 small slate and cement-block houses. These tiny homes stand roof to roof, with narrow alleyways zigzagging between them.

When the news broke that the city government was planning to tear the neighborhood down to make way for a park in 2006, the civic group Green Tongyeong 21 Commission held a mural contest and offered a grand prize of 30 million won.

Thirty-six young artists came from all over the country to paint the walls of the homes and alleys in the neighborhood during the week of the contest. Tongyeong Mayor Jin Euy-jang, a painter himself, also participated. 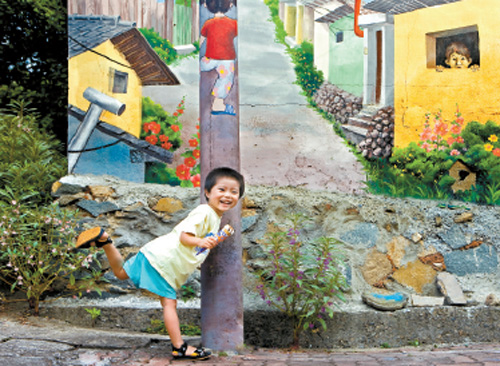 Hong Jong-hyeon, 5, runs around Suam Village in Cheongju, North Chungcheong, where the village walls are covered with paintings of tigers, flowers and birds.

Dongpirang later gained fame as Korea’s Montmartre, drawing an average of 20-30 tourists on weekdays and 200-300 on weekends.

Look for Jungang Live Fish Market. As you face the market, Dongpirang is the small hill on your right.

Chickens laugh next to green trees. Children hold tall, colorful pencils. These are two of the pictures on the walls of Dangsan Village. “Mannal Gogae,” which means the “hill where we will meet” is the highest point in Masan and is the site of a legendary mother and daughter reunion. The wall paintings near the hill were painted last May.

An Village (An Dongne) was once a well-known slum in Busan. But the once-faded walls now serve as the canvas for the people of Busan.

For three months since March 2008, roughly 230 students and city residents have been busy transforming the walls of 250 houses here.

The project brought the village back to life and it has been reborn as the largest village in the country to be decorated with murals.

Take Busan subway line No. 2, and get off at Munjeon Station. There is a map of the 47 different paintings at the village entrance.

Not many people in Cheongju are familiar with Suam-gol. When Cheongju decided to redevelop Sangdang District, Suam Village was excluded. The Korean People’s Artist Federation in Cheongju began painting the walls of Suam last October. The people painted on the walls of the houses resemble those inside.

Go to Cheongju City Hall. Suam-gol is the neighborhood across from the City Hall.

The name of this neighborhood, “Moun,” means “neighborhood amidst the fog.” It is located in the middle of Mount Manggyeongdae, about 700 meters above sea level. Twenty years ago, there were as many as 20,000 people in the village, backed by a prospering coal industry. But when the mine closed in 1989, the village lost the bulk of its population. Today, there are just 26 families, a total of 50 residents.

Two of the residents, Kim Heung-sik, 54, and his wife, painted scenes from children’s books on the walls of the abandoned houses and planted flowers on the roadside.

Take Road No. 31 from Yeongwol-eup, drive 30 minutes further and you will see the tomb of Kim Satgat. The village is opposite the tomb.

In 2006, the Ministry of Food, Agriculture, Forestry and Fisheries selected this village for green tourism. Villagers planted chrysanthemums at the village entrance and painters were called in from Seoul to paint flowers on the walls of their homes. The painters also drew a winkled face of a village woman on the fence of one of the houses.

Take the West Coast (Seohaean) Expressway and exit at Seonunsan IC. Take road No. 23 and drive for 2 kilometers.