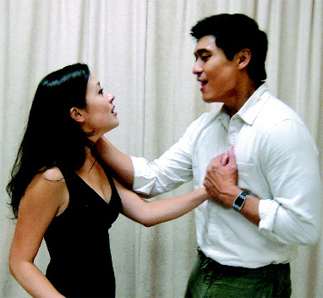 NEW YORK - The Chelsea Studio in Manhattan was packed last week with actors taking part in a workshop to promote a new musical called “Tears of Heaven,” and an audience of musical insiders checking out the production.

It’s an unfamiliar strategy here, but in New York producers often showcase a new work through an informal industry reading, with actors holding scripts and scores without sets, special effects or makeup.

What’s interesting about this new show is that the producers are Korean and it’s an original American commission for Korea. The original book is by Phoebe Hwang, and the show will debut in Seoul in the latter half of the year 2010.

The show is about a Korean soldier fighting in the Vietnam War and a Vietnamese woman, a love story that is in fact a good example of the globalization of the local musical production system.

“Although the story has Korea and Vietnam as its background, the story itself is universal,” said Seol Do-yun, 51, director of Seol & Company and the producer of “Cats” and “Phantom of the Opera” in Seoul.

“It will appeal to audiences all over the world.”

Seol has teamed up with Kim Gwang-su, 48, head of Creative Production, who gave singers like Jo Sung-mo and SG Wannabe their first big breaks.

But the show has been written by an American based in New York.

Frank Wildhorn, 51, famous for writing the musical “Jekyll and Hyde,” was first drawn to the project after watching a Korean music video.

“Somebody brought me a music video clip. I heard it was of a famous singer in South Korea. An ardent visual immediately caught my attention,” Wildhorn said. The singer was Jo Sung-mo singing “Ashinayo (Do You Know).”

Whatever attracted Wildhorn has also interested a slew of veteran Broadway performers.

Among those in attendance were John Cudia, who is playing the eponymous Phantom in the 2009 revival of “Phantom of the Opera,” and star actress Deborah Lew, who appeared in the musicals “Beauty and the Beast” and “South Pacific.”

Grason asks Lynn to “leave for America together,” but Lynn gives him the cold shoulder.

Seized with jealousy, Grason tries to get Jun to undertake a dangerous mission, but, noticing the foul plan, Lynn has no choice but to leave her lover Jun.

As the story has the Vietnam War as its setting, it might look a bit similar to the musical “Miss Saigon,” but it’s clearly different, according to Wildhorn.

“The story focuses on a romantic love story,” Wildhorn said. “While Miss Saigon has a Western point of view, Tears of Heaven includes an Asian point of view.”