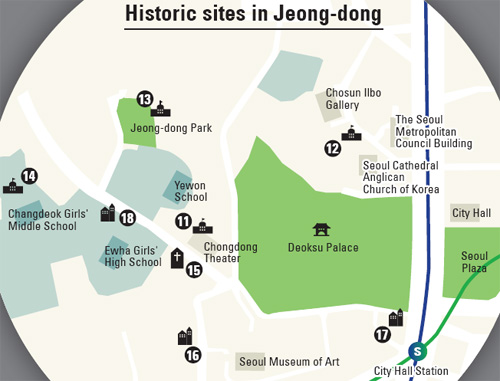 For the past five months, readers of the Old Seoul series have traveled back a century through rare photographs of late 19th through early 20th century buildings and tales of people and events in Seoul. The 11th to 20th installments, which wrapped up last week, took readers mainly to the Jeong-dong area in central Seoul, where foreign legations, churches, schools, hotels and hospitals breathed new life into Korea. For most of Joseon Dynasty (1392-1910), the Bukchon area in Jongno was the backdrop for important sociopolitical events as it was close to the royal palaces, and thus it was where a host of high-profile, influential figures resided. Between the late 19th and early 20th centuries, however, the foreign quarter in Jeong-dong emerged as a new area of importance in Korea’s modern history.

The 19th and 20th editions also introduced two of Korea’s royal palaces - Gyeongbok and Changgyeong. Both look quite different today from the way they appear in the photos. Particularly interesting are the structures that have vanished with time - the east watchtower connected to the palace walls in Gyeongbok Palace and the large zoo that once housed giraffes and elephants in Changgyeong Palace.

*The series is more than half over and there is much more to explore, but before we do we take a look back at the previous editions.