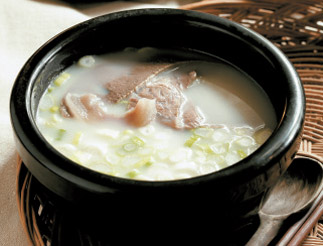 A steaming bowl of Seolleongtang is ideal for chilly autumn days. Provided by the Korea Tourism Organization

It’s fall. The weather gets chilly and we start to crave hot food. At times like this, a bowl of highly nutritious seolleongtang may be just what you’re looking for.

Seolleongtang, or ox bone and stewed meat soup, is a traditional Korean dish of ox bone-based broth with thin slices of beef brisket. It is inexpensive and has long been popular with Koreans.

The soup base is made of slow-cooked ox bones that are boiled for several days. This produces a rich, milky broth that is a good source of protein and calcium.

The origins of seolleongtang can be traced to a ceremony from the Joseon Dynasty (1392-1910) in which the king would visit an altar called the seonnongdan to preside over a prayer ritual. It was believed the ritual would bring a bountiful harvest in the coming year. During the ceremony a cow would be killed as a sacrificial offering, and afterward it was made into a soup.

The best accompaniment for the soup is a side dish of well-fermented kkakdugi kimchi. Kkakdugi is a refreshing radish kimchi, which helps to offset any pungent aroma of seolleongtang while also providing a crunchy contrast. In addition, kkakdugi contains various enzymes that aid in the digestion of the large amounts of beef protein and fat present in the broth. Enjoying seolleongtang and kkakdugi can be as rewarding as a lavish banquet.

In addition to its therapeutic qualities for soothing colds and the flu, seolleongtang is also a great remedy for hangovers, which easily explains the crowd of drunken adults who pack seolleongtang restaurants every night starting around 2 a.m.