In a season that should be full of festivals, fears of the new flu are closing festival doors around the country. The loss of revenue has angered festival organizers that were hoping the added income would give them a boost in the current economic downturn, while the loss of beloved festival events has upset attendees.

Some festival organizers, bowing to a decline in demand for tickets, have canceled or postponed their events voluntarily. But others say they came under pressure to do so after a government request that festivals be cancelled was issued early this month.

As the A(H1N1) influenza virus spreads, hundreds of festivals and events have been postponed or canceled. Among the axed major festivals are the Jeonju International Sori Festival, the Andong International Mask Dance Festival, the Onggi Expo Ulsan Korea and the Bucheon World Intangible Cultural Heritage Expo, to name a few. The Gwangju World Photonics Expo 2009 was postponed to the spring. Now, the organizers of these festivals are busy refunding tickets, canceling contracts with private organizations and performing groups and making apologies to the public.

“Many of the visitors to our festival are children and seniors, and there would have been a high chance of infection,” said Kim Myung-gon, chairman of the Jeonju International Sori Festival Organizing Committee, explaining why the festival was canceled. “The level of participation from the community also seemed low because of the flu, and the situation looked bad.”

According to the organizing committee, the ninth annual Jeonju festival, which was originally scheduled from Sept. 23 to 27, could have pulled in more than 2 million spectators.

According to the Ministry of Public Administration and Security, 270 of the 1,049 festivals around the nation scheduled between September and December have been cut. Considering that the number only includes events lasting two days or longer with expected attendance of over 1,000 participants, there could even be more festivals that have been canceled.

Most of the festivals are organized by regional governments and the festivals tend to be dedicated to showcasing provincial cultural traditions. 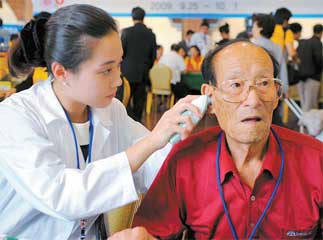 A senior citizen participating in reunions with separated family members in North Korea has his body temperature checked before the reunion last Friday. [Joint Press Corps]

The postponement or cancellation of the festivals has often resulted in a loss of morale among festival organizers, especially considering they have invested billions of won, not to mention hundreds of hours, into preparing for the events.

“It is heartbreaking,” said Yoo Gill-chon, secretary general of the Bucheon World Intangible Cultural Heritage Expo, which was scheduled from Sept. 18 to Oct. 7. The expo organizing committee called off the event on Sept. 4.

“It is not like we don’t want to hold the festival. The preparations were almost complete when the event was canceled,” Yoo added.

“I feel very sorry,” said Jun Chang-joon, secretary general of the Andong International Mask Dance Festival, which was scheduled from Sept. 25 to Oct. 4. “But the level of community participation was very low. In the past, 2,000 to 3,000 tickets were reserved before the festival, but this year there were almost no advance reservations because of the flu.”

In better times, the economic gain from the festival would have been estimated at 60 billion won ($50 million), according to data from Andong National University.

According to the organizer, the 13th traditional mask dance festival had the potential to attract 1 million spectators to the city, which is known for its old mansions and Confucian culture. In a bid to generate interest in the festival, staff had sent over 3,000 invitations to embassies in Korea, performance halls and international organizations.

The event was supposed to have taken place throughout the city with a few hundred programs by thousands of performers, including over 100 from overseas. The organizing committee intends to compensate foreign performing groups for penalties incurred from canceled plane reservations.

The official report is that the festivals were called off because of concerns about the flu, but some say the real reason behind the cancellations was a warning issued from above.

On Sept. 3, the Public Administration Ministry sent an official notice to regional governments asking them to cancel festivals scheduled to last two days or longer with expected attendance of over 1,000.

“With the flu spreading in the community, the epidemic is expected to peak in October and November,” the ministry said in the statement. “Festivals and events should in principle be canceled, and those that are imminent should be downsized or postponed.”

The ministry said it appreciates that a number of regional government heads had already made difficult decisions and axed events voluntarily.

The ministry’s warning resulted in a series of event cancellations around the country that have been met by a strong backlash from regional governments and festival organizers. 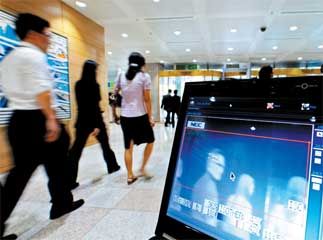 Monitors read the body temperatures of passersby at the Central Government Complex in Seoul. [NEWSIS]

In criticizing the government warning, Lee Charm, president of the Korea Tourism Organization, said on Sept. 14 that there were few regional governments in other countries that have been forced to cancel scheduled events and festivals due to the flu scare.

“Many international events [in Korea] .?.?. have been canceled, which has really dealt a severe blow to area businesses, from taxi drivers to restaurant owners,” Lee said.

As opposition to the cancellations increased, the ministry toned down its warning on Sept. 11 but the content of its statement had not changed much from the original. It only said that the matter should be dealt with by city, county and provincial heads and that indoor events should be canceled.

“The second notice from the government is not much different from the first one,” said Jun of the Andong festival. “Besides that, the community has already lost its enthusiasm.”

The Gwangju Design Biennale initially decided to cut the duration of the event by half, to 24 days, but upon receiving the ministry’s second notice, it decided to proceed as planned and hold the festival according to the original schedule - from Sept. 18 to Nov. 4. Instead of reducing the number of days, the biennale is implementing various preventive measures. It has set up a health center for potential patients and installed hand sanitizing devices. It is also checking visitor temperatures at the entrance to the Biennale Hall.

“Because the Biennale is partially funded by the government, it was difficult to ignore the recommendation,” said a Gwangju Design Biennale official who declined to be named. “We could be put at a disadvantage financially for the next event.” 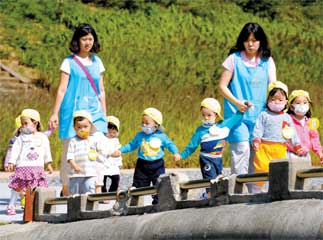 Children enjoy the great outdoors in their masks near Yangjae Stream in southern Seoul.[NEWSIS]

The biennale got to keep its original schedule. For those festivals that are already canceled, however, it is almost impossible to turn back the clock.

“It is difficult to call off a festival but it is even more difficult to undo the cancellation,” said Yoo of the Bucheon World Intangible Cultural Heritage Expo. “If it’s a domestic event, it is possible to reverse the decision, but it’s more difficult for international events because communication between countries is not so easy.”

Festival organizers are not the only ones complaining. People who have been looking forward to attending annual festivals are also disappointed.

“I went to see the opening performance but then I realized the expo was canceled,” a Bucheon citizen wrote on the event Web site. “I took time to go there but only ended up wandering around the place where the expo was supposed to have been held.”

“There are dozens of people who die of car accidents every day but people still go out and walk around the city,” an Andong citizen wrote on the Andong festival Web site. “No matter how dangerous it is, the A(H1N1) virus is just the flu. It is not a good enough reason to cancel the festival.”