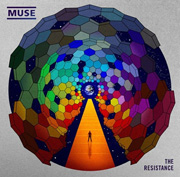 Muse’s music has always lent itself well to stomping around like a badass.

This would explain why the first half of their latest album, “The Resistance,” would have been perfect runway music for the recent fashion weeks in Paris and Milan.

The band sets off the plaintive wail of lead singer Matthew Bellamy with full, pulsing instrumentals that, as the album progresses, grow increasingly operatic and orchestral.

This crescendo of heightened musicality reveals the ambition behind this offering (see the last three tracks, which make up a tripartite “symphony” called, of all things, “Exogenesis”).

Aspiring to such lofty results comes with mixed success, as the best tracks definitely come early, like “Resistance” and the very Depeche Mode “Undisclosed Desires.”

Still, the band deserves applause for its serious efforts, which show that without a doubt, Muse could never be content with offering its acolytes the status quo.