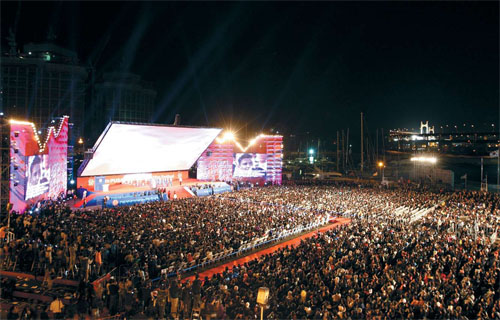 The 14th Pusan International Film Festival opened last night in the southern port city of Busan with over 5,000 people in attendance. The prestigious festival will run for nine days through Oct. 16. [YONHAP]

Every year around this time, thousands of people head to the southern port city of Busan, where the smell of the sea riding a crisp autumn breeze mingles with the faint scent of filmstrips at the Pusan International Film Festival.

The festival, now in its 14th year, is set to screen its biggest lineup ever, with 355 films from 70 countries.

Part of the festival’s success can be attributed to the fact that it brings something new every year to cineastes who wait anxiously for the festival’s autumn opening.

“This year’s PIFF will have the largest number of films ever, and we will be graced with the most glamorous guests we have ever had,” PIFF director Kim Dong-ho said. 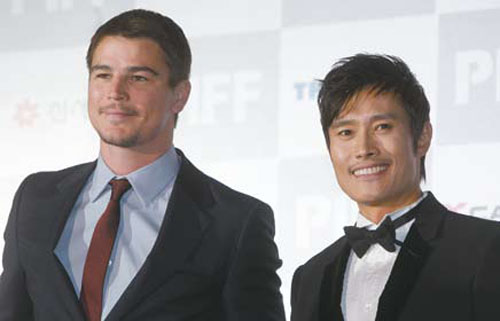 Actors Josh Hartnett and Lee Byung-hun, who co-star in the movie “I Come with the Rain,” attend the festival’s opening ceremony.

Kim, who has been with the festival since its inception, has good reason to be proud of this year’s lineup. The event will play host to 98 world premieres and 46 international premieres (films that are being shown there for the first time outside of their home country), which he says reflects the festival’s growing prestige.

Another feature of the festival is that it will screen more Korean films, both old and new, than ever before.

With the opening film “Good Morning President” at the head of the list, a number of first-run Korean films will be screened during the festival, according to event organizers. In the “Korean Cinema Today - Panorama” section in particular, premieres will outnumber previously released films.

There will also be four retrospectives on Korean cinema. The first spotlights the late Korean director Ha Kil-chong, who was an icon for contemporary intellectuals in the 1970s; this year marks the 30th anniversary of his death. There are also two retrospectives on the late director Yu Hyun-mok and the late actress Jang Jin-young, both of whom passed away this year. The final retrospective titled “Archaeology of Korean Cinema” is the outgrowth of a program that works to restore Korean films. The section features three Korean movies rarely screened for general audiences.

The festival has generated a good deal of buzz in the weeks leading up to its opening, largely due to the extraordinary lineup of Korean and overseas celebrities who are expected to attend. Among them are three international heartthrobs - Lee Byung-hun from Korea, Josh Hartnett from the United States and Takuya Kimura from Japan. All three star in the movie “I Come with the Rain” and will be featured in the festival’s Gala Presentation.

Hartnett shared his excitement about his first visit to Korea and meeting his fans in a letter released this week by the film’s local promotion agency, in which he wrote: “As you may know, I’ll be attending the Pusan Film Festival this year to promote the film ‘I Come with the Rain.’ I am very excited about my visit. Byung-hun Lee has told me many great things about Korea, and now I get to see it for myself. I’m looking forward to meeting our fans, eating some good food, seeing the sights. I hope you enjoy the film. See you soon.”

The film made headlines after tickets for the Busan screening sold out in less than a minute when online ticketing began late last month. The festival’s opening and closing films also sold out just as quickly.

But no worries, there are hundreds of other films in the festival’s main competition section, “New Currents,” which features outstanding films from Asian countries. Meanwhile, the “Flash Forward” section, which has been turned into a competition section this year, is more devoted to films from non-Asian regions like Europe.

“All the films featured in the New Currents section are either world or international premieres,” festival director Kim said. “And in general, the range of films that will be screened during the festival has been expanded to include underrepresented regions in African and Central Asian countries such as Tajikistan, Nepal and Bangladesh.”

Films will be screened in 11 different sections, including New Currents, Flash Forward and several special programs, during the festival. Screenings take place at four theaters in the Haeundae Beach area - Megabox, CGV-Centum City, Lotte Cinema-Centum City and the outdoor theater at the Busan Yachting Center - and two in Nampo-dong, downtown Busan (Daeyoung Cinema and Cinus).

The wide selection of films will be accompanied by various special events. PIFF Village, located in the Haeundae Beach area, is expected to be the main spot for major activities, such as actor and director question-and-answer sessions with fans.

In addition, there will be concerts every evening at 7:30 p.m. from today through next Thursday at outdoor theaters in Haeundae, giving audiences a chance to enjoy music and movies under the starlit autumn sky in Busan.

Meanwhile, the festival’s only audience-oriented party, “Cinematic Love,” will rock the beach from 10 p.m. Saturday until 4 a.m. the following day. The event features performances by bands Drunken Tiger and Daishi Dance.