A lifetime of memories, recalled through food

A lifetime of memories, recalled through food 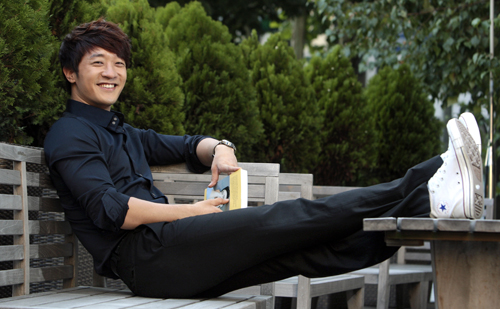 Pop singer Alex recently published his book, “Alex’s Spoon,” which includes his own experiences and memories associated with food. By Choi Seung-shik

Whenever Chu Heon-gon, a member of the Korean pop group Clazziquai who goes by the name Alex, hears the word nakji-bokeum, it reminds him of the time he broke up with his girlfriend.

The 31-year-old can still vividly recall the tears streaming down his face while he finished the spicy dish of pan-broiled octopus and red pepper. However, the word castella, a type of sponge cake, will always remind him of his mother, as he often ate the sweet and moist cake as a child while waiting for her to come home from work.

The singer details these and other past experiences and memories associated with food in his recently published book, “Alex’s Spoon.” While he’s usually known for crooning to his fans on the stage, he’s no stranger to the kitchen. Fans had a chance to see a new side of Alex when he cooked on the celebrity reality show “We Got Married.”

His relationship with food and cooking started much earlier on, though. After his family emigrated from Korea to Canada, he trained part-time as a chef at a Japanese restaurant, marking the start of his love affair with food.

“I had cuts on the top of my hand after I tried learning how to slice tuna fish properly, but I also got to learn how to run a restaurant,” Alex said. “At the time, I had plans to marry my girlfriend, so I worked even harder.”

His efforts paid off when a food critic from a Canadian newspaper focused more on Alex’s very own misoshiru (a variation on miso soup) than the restaurant’s sushi and other main dishes.

But he soon decided to move in a different direction, though his work ethic remained. Alex parted ways with his girlfriend and was then encouraged by his sister, who was an original member of Clazziquai, to join the group. So he returned to Korea in 2001 and did just that.

Clazziquai has released numerous albums in Korea and Japan and went from being an underground musical gem to super stardom after their hit single “She Is,” which was featured on the popular Korean TV series “My Lovely Sam-soon.”

Alex said one of his concerns is that some people judge him solely by his appearance without realizing that he actually worked numerous part-time jobs in the past and had to put in a significant amount of effort to get where he is today. These people are quick to peg him as a “rich boy who has always led an easy life,” he said. Writing the book is one of the ways he chose to help shed that image.

“I’m the type of person who prefers blood-sausage soup and rice and pork broth rather than wine and pasta,” Alex said. “I wanted to show who I really am by writing this book.”

His book includes original photographs, secret recipes and information on some of his favorite restaurants.

“Eating a meal with someone is so important and meaningful,” he said. “You can easily bond by eating food with complete strangers and become good friends. Food brings people closer together, so I hope my book will help people enjoy their lives and what they eat.”