Latest ‘Speed’ title blends in with the crowd

Latest ‘Speed’ title blends in with the crowd

It seems like the Need for Speed series has been around forever.

Past editions have all had good graphics, but what really set the series apart from other racing games were the police chases. Aside from simply trying to beat other cars on various tracks, the developers at Electronic Arts included movie sequences and detailed plots to keep gamers interested.

The latest edition - the 15th in this long-running series, which is older than some teenagers - features several changes. But instead of trying something unique to stand out from the crowd, it seems the developers of “Need for Speed: Shift” did just the opposite: They tried to blend in.

As with your standard racing games, Shift offers a career mode wherein the goal is to race in various events and earn points. Gamers can then use their points to upgrade and customize their vehicles. The points can also be used to purchase one of 72 fully-licensed cars. 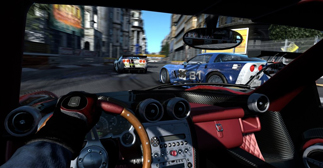 Like previous editions, the graphics of the cars as well as the tracks are nothing short of excellent. The in-car view provides gamers with some fun visuals, such as the driver shifting gears and adjusting the rearview mirror. The crash scenes provide a nice touch as well. When you smash into an object or another car, the screen blurs and turns a shade of gray. The crash-related sound effects, which include a gasp from the driver, add to the overall authentic feel of the game.

What also stands out is the handling. Each vehicle provides a unique driving experience. A Maserati, for example, rounds corners smoothly, while the Nissan Skyline GT-R 34 provides more power.

Shift offers 18 tracks, both authentic and fictitious, from the U.S., Japan, England, Germany and Belgium, and it has five different modes: your standard racing mode, time attack, drift mode, lengthy races and car battles. Drift mode, where you have to take turns as smoothly as possible, was fun, but it can take some time getting used to.

The verdict: I was impressed by the detailed graphics of the game, and while it was fun to play for a few hours, it just doesn’t offer anything drastically different enough to make this one a keeper.

Maybe it’s just that I’m not much of a racing game fan, but I haven’t even felt like playing Shift a second time. If you’re not a fan of the racing genre, I’d advise you to steer clear of this title.