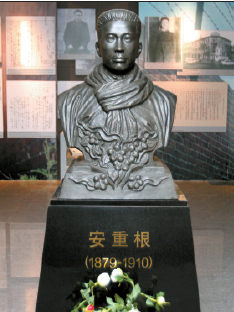 A bust of Ahn Jung-geun inside a memorial museum in Lushun, China that just opened to honor those that fought for Korea’s independence. [YONHAP]

Today marks the 100th anniversary of the birth of a hero and the death of a statesman.

On the morning of Oct. 26, 1909, at Harbin Station in the city of the same name in northeastern China, Japanese statesman Hirobumi Ito and his entourage got off the train. At that moment, a young man in a black suit approached Ito through the crowd. Three shots rang out. When the smoke cleared, Ito was dead.

The 68-year-old Japanese nobleman was one of the founders of modern Japan and its first colonial ruler over occupied Korea. The daring shooter was Ahn Jung-geun (1879-1910).

Today Ahn is revered in Korea as one of the country’s most celebrated independence fighters, not only for his act of resistance against Japanese colonization but also for his efforts to bring about peace in the Asian region, particularly between Korea, Japan and China.

On the 100th anniversary of this eventful day, Koreans are finding a variety of new ways to remember a hero.

“We thought, this is it - the Ahn Jung-geun Guitar!” said Han Yeong-hun of Samick Musical Instruments.

The local musical instrument maker has recently introduced the Ahn Jung-geun Guitar, a limited-edition electric guitar made especially for the centennial of Ahn’s assassination of Ito. 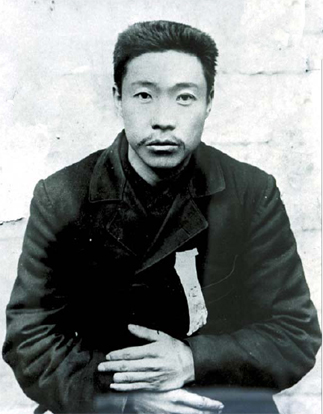 Ahn Jung-geun’s ring finger is conspicuously short. Like his fellow independence fighters, he cut it off as a symbol of his vow to fight for Korea’s independence from Japan until his death. Today, Ahn’s handprint is a nationally recognized image of his efforts. [JoongAng Ilbo]

The pairing of Ahn and an electric guitar may seem like an unlikely combination. But apparently there is a reason.

Samick, one of the market leaders in the guitar industry, has in recent years felt more and more threatened by its foreign rivals. The recent setback in the world economy also took a toll on its business.

“We felt we needed to brace ourselves, to face these challenges with strong determination, just as Ahn did,” Han said.

The Ahn Jung-geun Guitar is Samick’s way of declaring its determination to expand its business to include electric guitars, Samick officials say, albeit with caution.

One of Ahn’s famous quotes does say, “Born a man, I strived after determination to defeat the enemy.” So it’s hard to deny the connection there. 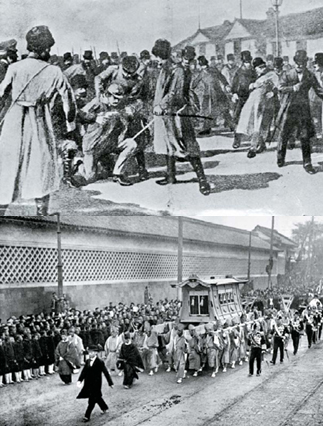 Top to above: An illustration of Ahn Jung-geun’s shooting of Hirobumi Ito, which took place 100 years ago today at Harbin Station in China. Right: The funeral of Ito, who was the first resident general of Korea and a four-time prime minister of Japan. [JoongAng Ilbo]

Yet there is a reason why Samick is cautious about its new venture. Few companies have dared to use Ahn as a marketing tool and capitalize on his achievements because his life and image have been represented as grave and solemn.

But there are some signs of a change in this image in recent years.

A car sticker imprinted with the word “Daehangukin” (Korean citizen) in calligraphy done by Ahn, who was known for the quality of his script, has been on sale at an online shopping site for a few years. During the 2006 World Cup in Germany, Ahn Jung-geun T-shirts were sold to cheering Korean fans. In 2005, German camera manufacturer Leica introduced the Ahn Jung-geun Camera in celebration of Korea’s 60th anniversary of its independence from Japan.

Industry sources say historic figures become marketing tools when interest in them is at its height. In that sense, now may be the time for products related to Ahn.

Although the use of Ahn’s image as a marketing tool is relatively new, Ahn has long been a popular muse for other cultural endeavors. His life has been made into a film, a play and even an opera. A musical of Ahn’s life, appropriately titled “Hero,” will make its debut today. Next March, on the 100th anniversary of Ahn’s execution, a TV drama on him will premiere. In April, another play depicting Ahn’s life written by Japanese playwright Tatsuo Kaneshita will be staged.

But there is something different about what’s being produced. While the focus of these works has previously been on the assassination, and the mood highly nationalistic, these days the focus of the works has shifted to include Ahn’s life as a whole, as well as his philosophies and theories. The Kaneshita play does not even illustrate the murder scene.

“We produced the musical hoping to present it not just in Korea but also overseas,” said Yun Ho-jin, the director of Hero and the chairman of the Korean Musical Association. “So we broadened our perspective, not just depicting the assassination but Ahn’s beliefs and historic context as well.”

But this centennial anniversary also highlights another tragic chapter in Ahn Jung-geun’s tale: His remains have yet to be found.

After being jailed and executed at Lushun Prison in the port city of Dalian, northeast China, on March 26, 1910, records show that Ahn’s body was buried in a cemetery nearby. With his last words, Ahn is known to have asked that his remains be moved to Korean soil once the country won independence from Japan - but his dying wish remains unfulfilled.

The 100th anniversary of Ahn’s shooting of Ito is being celebrated in various of ways in Korea. From left: An Ahn Jung-geun guitar made by Samick Musical Instruments; a bumper sticker printed with the words “Daehangukin” (Korean citizen) written by Ahn; and a poster of handprints. [JoongAng Ilbo]

To find it, the Korean government has been doing research on possible locations for the site, gathering testimony and piecing together the speculation. It finally held its first official excavation this spring.

The work took place mainly at a site near a prison identified by the daughter of a former guard as the burial site. But nothing was found.

The construction of a massive apartment complex at the same location is scheduled for completion by the end of the year, which could hinder future excavations.

Recently, a self-professed descendant of the Korean independence fighter Lee Hoe-yeong (1867-1932) gave information on a new site where Ahn’s remains may have been buried. But the Korean government says it does not plan to conduct any more excavations.

“Unless a solid, credible piece of evidence of a possible burial site comes up, it’s unlikely that there will be another excavation in the future,” said Hwang Yong-hae of the Ministry of Patriots and Veterans Affairs. “Before carrying out the excavation this spring, we examined numerous possible sites, including the site identified by the claimed descendant of Lee Hoe-yeong. Of the sites we examined, we concluded the site identified by the daughter of a former guard was the most plausible.”

According to Hwang, so many prisoners, mostly Chinese, were buried in the area around Lushun Prison that there have already been numerous excavations there in the past. Also, the Chinese government has designated the area as a special zone for education on patriotism.

“Both of these factors greatly decrease the possibility of finding Ahn’s remains,” Hwang explained.

Ahn did more than advocate for the independence of Koreans. His ideas on cross-border peace and cooperation are still relevant today.

At a recent trilateral summit in Beijing, China, leaders from China, Japan and South Korea vowed to cooperate in developing an East Asian community, an idea first proposed by Ahn a century ago.

While imprisoned at Lushun from the end of October 1909 until March 1910, Ahn continued to write. His theories on international politics, particularly East Asian politics, are best portrayed in an essay he wrote during that period titled “On Peace in East Asia.”

“Korea, Japan and China should cooperate to stand up against Western powers,” Ahn wrote.

One of Ahn’s suggestions was to launch an East Asian Peace Conference with Korea, Japan and China as the three major players. He believed that these three countries, if each given national sovereignty, could work together toward peace in the region.

Ahn noted that since the Japanese were ahead in terms of technology at the time, they could lead the other two nations in technological progress. He believed that if this conference was successful, other Asian countries such as Vietnam, Thailand and India could eventually participate as well.

Ahn was fairly specific in his ideas for such a coalition. He proposed that Lushun, an internationally disputed area at the time, serve as the headquarters for conference, thinking that if Japan gave up its claims to the city and it became neutral, it could become a symbol for peace in the region. He also proposed that the three countries start a regional bank, a common currency and a joint army.

“In his essay, Ahn had already formulated the idea of a community quite like the European Union,” said Yoon Kyung-ro, a professor at Hansung University.

These ideas will be discussed at an academic forum commemorating the 100th anniversary of Ahn’s shooting of Ito hosted by the Northeast Asian History Foundation. At the forum, slated for today and tomorrow at the Korea Chamber of Commerce and Industry in downtown Seoul, noted scholars from Korea, Japan and China will share their views on Ahn’s ideas.

Eiji Makino, a professor at Hosei University, argues that a “correct understanding of Ahn’s shooting of Ito is an inevitable task for Korea, Japan and China, which will help the countries develop trust among themselves.”

In Ahn’s autobiography, which he completed during his five-month stay in prison, he wrote that after being sentenced to death, he met Judge Hirashi, who had presided over Ahn’s trial, and explained to him his theories on peace in East Asia.

Ahn asked if his execution could be postponed for a month so that he could write a book on his theories. The judge granted a stay of several months, but he was eventually overruled. The essay, “On Peace in East Asia,” was never finished.


“This pan-Asian peace theory provides realistic solutions to the challenges and problems the East Asian region and the world face even today,” said Sin Wun-yong, a researcher at the Ahn Jung-geun Memorial Committee.