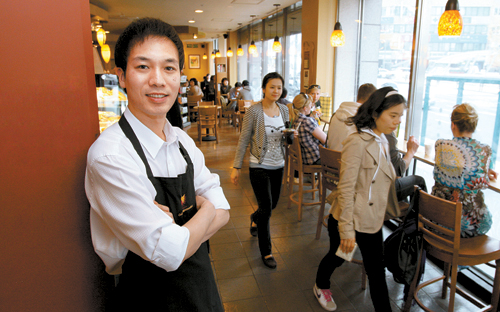 Lee Byeong-yeop, 30, started out as a part-time employee and now works as a deputy manager at Starbucks in Sogong-dong, central Seoul. By Kim Kyung-bin

Remember your first part-time job, when you worked extra hours after school for extra pocket money, or used your earnings to save up for college?

Those days appear to be a thing of the past for many people around the world. The depressed economy has intensified competition for a shrinking number of jobs, part-time, full-time or otherwise.

In Korea, young job seekers are using part-time work as the first step toward permanent full-time employment in their chosen field. In addition to just getting their foot in the door, they hope the job experience can give them an edge when they apply for what they hope will be bigger and better jobs.

According to the National Statistical Office, 312,000 twenty-somethings in Korea were unemployed as of September. This translates into a jobless rate of 7.6 percent among young adults in their 20s.

According to a survey of 202 college students by the YMCA last year, 86 percent of respondents said they have held part-time jobs at some point.

Last summer, Nitto Denko Korea, a local subsidiary of a Japanese company, recruited sales employees. With the tight job market, there were more than 100 people applying for each position.

One of the successful candidates was Ji Dong-geun, 27, who majored in restaurant, hotel and tourism business at Dongguk University’s Gyeongju campus. Ji’s Toeic (Test of English for International Communication) score was only a little over 800 while his grade point average was 3.72 out of 4.5. Although that record is little more than average by Korean standards, Ji offset his grades with part-time employment experience.

Ji had more than 10 part-time jobs while he was in college. He was a bartender for three months at a family restaurant. He worked for six months in the administrative department of an E-Mart discount store. He even sold canned beer at the baseball stadium in Jamsil-dong, southeastern Seoul. He also worked at a hotel in Tokyo as a janitor while he was studying Japanese.

In the end, it was Ji’s part-time job experience as a salesman that landed him a position on the company’s sales team.

Human resources personnel in many companies say previous work experience such as internships or part-time jobs count the most when they hire new employees.

A survey of 622 human resources personnel by JobKorea, a job information Internet portal, seems to support this. According to the survey, 54.3 percent of respondents chose internships and part-time job experience as the most important criteria for new employees. Some 24.4 percent chose awards while only 15.9 percent selected English proficiency test scores.

This shows that part-time employment experience can go farther than English test scores in finding a job. Sometimes, it can be the most important factor.

Kim I-sak, left, a Sogang University student, and Won Sae-rom, a University of Seoul student, scan for cameras at Doosan Art Center in central Seoul. Both Kim and Won want to work in the arts and are working part-time to get real-world experience. By Shin Dong-yeun

Jeong Seung-il, 28, who studied public administration at Hankyong National University, worked at a FamilyMart convenience store in Anseong, Gyeonggi, in April 2008. Jeong’s Toeic score was 750 and his grade point average was 3.8 out of 4.5. It was his part-time experience with the company that led him to a permanent position there.

When he was interviewing for the full-time position at FamilyMart, Jeong was asked whether he had applied any marketing theories to his work. It was a difficult question but Jeong was able to answer with ease.

“I told them I had placed the spoons next to the instant rice on the shelf to get people to buy them both,” Jeong answered during the interview. “As a result, sales increased.”

Jeong won the job and became a supervisor at FamilyMart.

These two examples show how important part-time jobs have become in a job market that has grown more competitive in recent years.

Job seekers can highlight on their resumes the sales or planning abilities they developed while working in part-time positions. These real-world experiences can help them stand out on job interviews.

“If job applicants have part-time employment experiences that are related to the position they are applying for, it means that they had an interest in the type of work they are seeking and then prepared for it,” said a recruiting officer at SK Engineering and Construction Co. “We don’t give extra points to applicants with part-time job experiences, but those with relevant part-time experience can distinguish themselves.”

Part-time jobs are usually short-term but there are people who continue in such positions for years. Kim Eun-jeong, 20, a sophomore studying Korean history at the University of Seoul, has worked for the past two years in a part-time job at the Woori Research Institute of Cultural Properties, where she manages cultural relics. She thinks of her current position as a stepping stone to her desired career as an archeological researcher.

Lee Yong, 21, a business major and a sophomore at Kookmin University, has been working part-time at government agencies and is currently a statistical research assistant at the Korea Environment Institute. Eventually, he would like to have a full-time job at a state-run company.

“If I keep working part-time, I believe it will help me find a permanent position at a state-run company someday,” Lee said.

Go Nak-cheon, a supervisor at The Shilla hotel’s duty free shop, seems to affirm this.

He says that part-time employment experience can pay off with a permanent position. 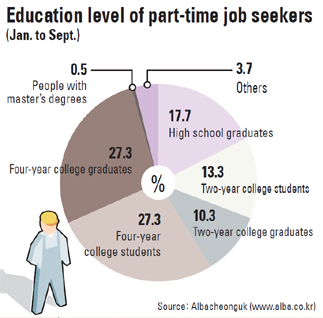 “There are sales employees who get into the company by earning extra points from their part-time job experience,” Go said.

Part-timers are considered temporary workers who work less than 36 hours a week. There are no legal protections for part-timers, which can lead to their mistreatment.

The JoongAng Ilbo called eight businesses that placed job postings on Albamon (www.albamon.com), a part-time job search site, and five of them said they pay less than the legal minimum wage of 4,000 won ($3.40).

The five companies said the new workers are hired for a probation period during which they are paid less than the minimum wage.

They know people will accept the low wages because they need the work. Job seekers know there are a lot of other people in line behind them looking for work as well.

The part-time job market is growing rapidly. According to Albacheonguk (www.alba.co.kr), a part-time job information site, the number of people who submitted resumes to find part-time jobs between January and September was 222,804, an increase of 36 percent from a year ago.

The pool of people submitting resumes included not just the usual group of college students but also college graduates and people with master’s degrees. As of September, 22 percent, or 4,209, of the new part-time job applicants at the site were college graduates. Hwang Su-gyeong, a researcher at Korea Labor Institute, said many college graduates are willing to work part-time because they cannot find full-time jobs. They want permanent employment but often find themselves with few options.

“The fact that college students are working part-time is a good thing because they are getting professional experience,” Hwang said. “However, if college graduates were to remain part-time workers because they are unable to find permanent positions, it would be a waste of human resources and a loss to society.”