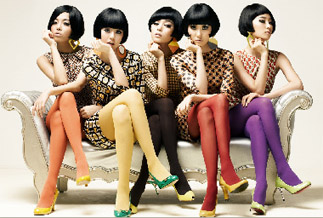 The women of Wonder Girls are making a splash in the world of music, ranking as the first singers from South Korea to work their way onto the Billboard Hot 100 listing.

The girl group has been touring for two months with the Jonas Brothers, riding the success of their hit single “Nobody,” which was written and produced by singer-songwriter and Wonder Girls manager Park Jin-young, aka JYP. The song, released in the United States last summer, recently reached No. 76 on the Billboard charts. The prestigious Billboard ranking presents a snapshot of the most popular songs in the U.S.

JYP said that the group’s success in America is partially due to the fact that their latest disc is sold in more than 900 Justice preteen clothing stores across the country in addition to record shops. “It’s just the beginning for the Wonder Girls,” JYP said at a press conference held in Cheongdam-dong, southern Seoul, last Friday. “There will be interviews with major newspapers and magazines along with appearances on TV programs.”

People magazine latched onto the group’s growing popularity, publishing an article last weekend titled, “5 Things to Know about the Wonder Girls.” The magazine described the group’s songs as “infectious bubblegum pop tunes” that incorporate a “retro-Motown vibe with inspirations from timeless style icons from Twiggy to Audrey Hepburn.”