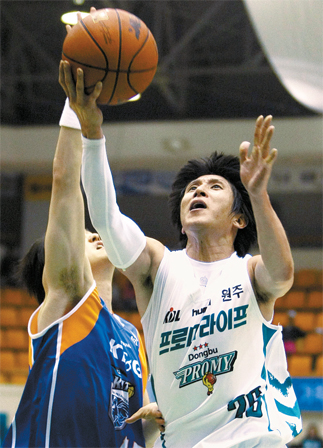 Park Ji-hyun of Dongbu Promy goes in for a lay-in during a Wednesday night game against KT&G Kites. [YONHAP]

Park Ji-hyun and Kim Joo-sung haven’t roamed the courts as one of the most dominant duos in the collegiate ranks for several years. Their careers have traveled down vastly different paths, but Park was reunited with Kim on the Dongbu Promy squad after joining the team in the offseason.

Kim has had a successful career to date as one of the best centers in the KBL. The first overall pick in the 2002 College Draft is the highest paid player in the league at the moment.

Park’s professional career has been a struggle so far. Since being taken fourth overall in the 2002 draft by the Daegu Orions, the versatile and heady point guard has yet to reach his full potential. Park’s scoring abilities and leadership on the court had him tabbed as one of the best point guards in his class.

“Ji-hyun was drafted, I think it’s time for me to serve my mandatory military service,” Orions’ star point guard Kim Seung-hyun had joked back in 2002.

Despite the high praise and expectations coming into the pros, Park failed to establish himself in the role of backup point guard in a cast of guards. His ability to read the opposing defense was considered a notch lower than fellow point guard Kim and hence could not crack the starting lineup. He rotated in and out of the starting five.

Considering Kim is one of the best, if not the best, point guard in the KBL, Park’s role with the Orions was understandable. In 2006, Park joined the LG Sakers and looked to be in good shape to earn the starting point guard role. However, Lee Hyun-min, a rookie out of Kyung Hee University, was drafted third overall by the Sakers and he emerged as a needed commodity in the LG back court. Park’s role was reduced again as Lee put up strong numbers.

Things look to be different this time around as Park joins his high school and college teammate. Furthermore, Dongbu had been in desperate need of a talented point guard since last season. It also helps that Kang Dong-hee, the head coach of Dongbu, was one of Korea’s top guards during his playing days. Kang is asking Park to play the role of coach on the court and to provide timely perimeter shots. Although Park started the season with less than desirable scoring stats in his first four games with the Promy, he has been averaging 10.5 points, 4.5 assists and three rebounds in his last two games.

“I am trying to step up my play so that people do not merely look at Dongbu as a team with a strong front court,” Park said. “I am with Kim for the first time in seven years and he has established himself as one of the top players in the league. He is helping me adjust to the changes.”