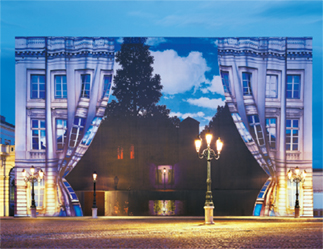 Christine is having dinner with her boyfriend Clay and his parents at their home. On their plates are pieces of homemade cake that Christine brought as a gift for Clay’s parents. Christine is uneasy because she has been suffering ominous hallucinations from time to time ever since she was cursed by an old gypsy woman. As she feared, strange noises begin to scratch Christine’s ears again, and the middle of the piece of cake on her plate starts to pulse. She cautiously digs into the cake with her fork and discovers an eye of the gypsy woman staring back at her! Christine, stifling a scream, aggressively stabs the cake with her fork.

This is a scene from the American horror movie “Drag Me to Hell,” which was released here this summer. The scene reminds me of the work of Sam Raimi, whose horror movies include the famous “Evil Dead” series and creatively combine both horror and black humor. But I also think the scene with the eye in the cake might have been influenced by a painting by Belgian surrealist artist Rene Magritte (1898-1967).

The painting, titled “Portrait” (1935), depicts a seemingly ordinary table setting with a thin slice of ham on a plate. But in the middle of the piece of ham there’s a large eye staring at us, the viewers. Our eyes naturally move quickly to an overturned fork beside the plate, creating a hefty amount of tension.

Magritte is perhaps one of the most beloved artists among directors of horror films. The poster for the classic occult horror film “The Exorcist” is said to have been inspired by Magritte’s “Empire of Light.” The poster depicts a dark house with a window emitting a strange light, a street lamp and the silhouette of the exorcist, which together conjure up a mysterious and ominous atmosphere. 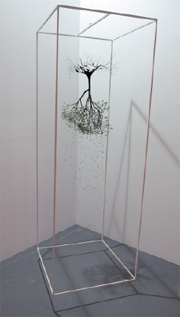 We can see the Empire of Light printed in the middle of a tarp covering the Magritte Museum, which was under construction in Brussels, Belgium, early this year, in a work by the photographer Han Sung-phil. In this print, a dark house with a glowing window sits amid shadowy trees and a lit street lamp, a stark contrast to the sunlit pastel-blue sky with white cumulus clouds above.

Empire of Light not only influenced The Exorcist, it also played a role in the 2007 Korean film “Black House.” Director Shin Tae-ra said in an interview that he showed the painting to his art team and asked the staff to refer to the painting to build the set of a dark house, in which major events of the movie occur.

Other horror directors have looked to Magritte’s works as well. The Korean film “Into the Mirror” from 2003 - whose remake “Mirrors,” produced by Romania and the United States, was released last year - was inspired by Margritte’s “Not to be Reproduced” painting from 1937, according to director Kim Sung-ho.

The oil painting depicts a man standing in front of a mirror, the back of his head to viewers. Despite the mirror, we cannot see his face, as the mirror also shows the back of his head instead of his face. While looking at this painting, Kim conceived the idea that images in mirrors actually reflect images from an independent otherworld rather than this one, which is the basic concept for his film.

Why has Magritte left such an indelible impression on directors of horror movies? Let’s return to Empire of Light. If you look at the sky portion of the painting and the street part separately from each other, you will find nothing grotesque or fantastic. But, combined in the same image, these ordinary scenes suddenly turn unfamiliar and creepy. This is called depaysement in French, a technique frequently used by surrealist artists. It means the transfer of an object from its normal environment or context to a completely different one. 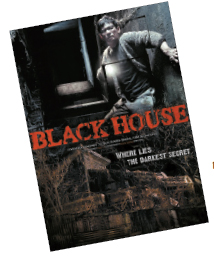 The depaysement displayed by Magritte is especially shocking. Whereas most surrealists - including Salvador Dali - usually depict distorted and grotesque representations of real objects, Magritte depicts each object in realistic and ordinary representations but makes them surreal by arranging them nonsensically or by combining them with each other. When such familiar and ordinary things suddenly appear in unfamiliar contexts, it creates an eerie feeling - perfect for horror movies. Accordingly, the paintings by Magritte inspire movie directors who want to show horror suddenly aroused in daily life through unconventional visuals rather than via the typical ghosts and monsters.

The influence of the depaysement techniques used by Magritte is not limited to horror films. Some of his works have been applied to advertising campaigns, and many contemporary artists have adopted the style as well. One example is Jorge Mayet, a Cuban-born artist, who created a piece featuring a miniature of an upside down tree hovering in the air in a transparent cube, creating a mystical atmosphere.