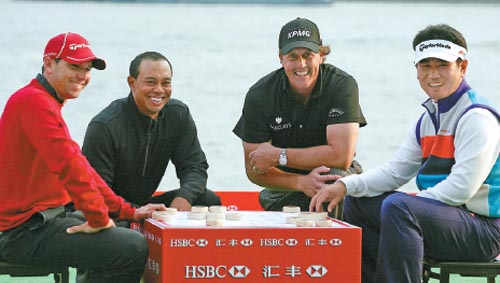 From left, defending champion Sergio Garcia of Spain, Tiger Woods of the U.S., Phil Mickelson of the U.S. and Yang Yong-eun of South Korea smile during a photo call of the HSBC Champions golf tournament Tuesday, Nov. 3 in Shanghai, China. The golf tournament will be held at Shanghai Sheshan International Golf Club from Nov. 5 to 8. [AP]

SHANGHAI - Yang Yong-eun headlines a powerful Asian challenge at this week’s HSBC Champions, with the Korean looking to repeat his memorable victory over Tiger Woods here in 2006.

The 37-year-old Korean will attempt to carve another niche for himself in the game’s record books when he bids to become the first player to win the tournament - now elevated to a World Golf Championship event - twice. The World Golf Championships-HSBC Champions will be played from Nov. 5 to 8 at Shanghai’s Sheshan International Golf Club.

When he triumphed in Shanghai three years ago, Yang was relatively unknown outside his homeland. But that changed when he won the U.S. PGA Championship in August, becoming the first Asian to win a Major.

“Even to this day, I try to revive the feeling I had the week I won the HSBC three years ago,” said Yang, who also captured the Honda Classic on the U.S. PGA Tour in March. “It was such a big tournament and yet I played with such poise. I try to recapture that feeling every time I play; it was my perfect tournament.”

The victory over Woods here was so etched in his memory that he used it to engineer another victory over the world’s best golfer at the PGA Championship.

“On the final day at the PGA Championship, I was drawing on the feelings I had when I won in Shanghai,” he said. “I was trying to recapture the calmness and the serenity, and it worked.

“A lot of players are usually forced out of their element because of their strong desire to win and thus try too hard. In my case there, I just tried to enjoy the moment because I had no pressure and nothing to lose.”

Alongside Yang, the Asian challenge will be bolstered by an impressive cast of champions from across the continent.

Ishikawa is already a superstar in Japan, having become the youngest winner of a men’s regular tournament on the Japan Golf Tour in May 2007 at the age of 15 years and eight months.

He continues to go from strength to strength, and his four wins in Japan this year persuaded Greg Norman to select him as a wildcard for the International Team in the Presidents Cup.

“I am delighted to have qualified for my first World Golf Championship event and look forward to playing in Shanghai very much,” Ishikawa said. “I have heard very good things about the tournament.” AFP