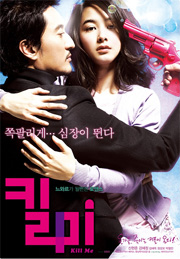 Kiss Me, Kill Me movie poster.

One of the most frequently made mistakes by first-time filmmakers is to “try too hard,” jamming all sorts of genres and fictional elements into one movie.

Director Yang Jong-hyun, 37, confesses he was no different in making his feature debut “Kiss Me, Kill Me.” But despite its complicated plot, his first feature seems to have a unique spark and sense of humor that allows audiences to overlook its flaws and just enjoy it.

Professional killer Hyeon-jun (Shin Hyun-jun) arrives at a house to kill a man in his sleep only to discover a young woman crying under the sheets. As the confused killer hesitates over his next move, the woman shouts, “What’s the matter with you! I paid you, so just kill me!”

Jin-yeong (Kang Hye-jung) decides to kill herself after a traumatic breakup with her boyfriend. But after failing in several suicide attempts, she hires a killer to do the job for her. 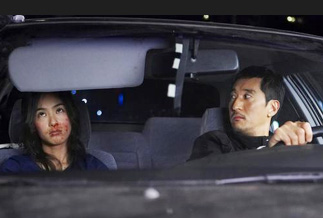 Jin-yeong decides to kill herself after a breakup with her boyfriend, but changes her mind after meeting the killer she hired to do the job for her. Provided by Sidus FNH

Furious at being used for the “wrong reasons” but helplessly attracted to her, Hyeon-jun abandons his mission and asks Jin-yeong out on a date. “Go out with me today and kill yourself tomorrow,” he says.

Full of humor and wit, “Kiss Me, Kill Me” observes these peculiar people and others - gangsters, an alcoholic - from a sympathetic and affectionate perspective.

In the film, these people are not just social outcasts, but lonely men and women who crave ordinary lives paying taxes, recycling rubbish, getting married and having children.

The movie is optimistic about love, showing how new romance gives Jin-yeong the courage to face her ex’s betrayal, and Hyeon-jun the hope to retire from his job and start over.

Throughout the movie, viewers will find themselves laughing, cringing and dabbing at their eyes, perhaps confused but never bored.

“I may have tried a little too hard, so I’m not completely confident people will understand or enjoy the movie,” director Yang said. “But I thought it’d be fun to mix contrasting images to create something humorous and emotional at the same time.” Yonhap