Cooking up advice for royalty

Cooking up advice for royalty 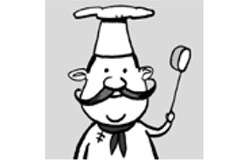 According to a narrative penned by Han Fei, a philosopher in China 2,200 years ago, one of the Qin Dynasty rulers was about to begin a meal when he caught sight of tufts of animal hair on the meat.

He summoned the chef and gave him a dressing-down since the hairs meant the meal was possibly unsanitary and could have proven fatal. But the chef explained to the king as follows:

“Your Royal Highness, I committed three crimes. First, I failed to shave the hair thoroughly from the meat, even though I used a sharp knife. Then, I failed to burn the hair off, although I roasted the meat over a charcoal fire. And finally, I failed to cut off the hair although I pierced it with a skewer.”

The king thought the chef was telling the truth, so he interrogated the chef’s assistant, a man who stood to gain a promotion if the head chef got fired.

The head chef was clearly an educated man. His oratorical skills in front of his boss suggest he was a man of learning and reason, not just your average cook.

The two men were regarded as wise men and had a great deal of influence over their respective lords.

The lesson is that important positions cannot be given to just anyone. Even cooks have to have pedigree.

The chef for King Hwan of the Qi Dynasty even cooked the flesh of his own son to win the favor of the king. The prime minister under Hwan was not convinced and he told the king that a man who cooked his own son was not a man to be trusted. But the king did not listen to the advice of his prime minister and duly patronized the chef. Later, the chef became one of five traitors who took the corpse of the king as a hostage.

Today the news is that White House assistant chef Sam Kass is a powerful man behind the scenes. Kass, who entered the White House with the Obamas, majored in history at the University of Chicago - a rare academic background for a chef. He reportedly has a big say on the food and health policy pursued by the Obama administration, attending meetings with the first lady.

In the film “Good Morning President,” which is now in theaters and stars Jang Dong-gun, there’s a chef who gives advice to the president whenever he is facing a difficulty.

While the movie is becoming a great box office success, Jang has admitted that he is in love with the actress Koh So-young. I wonder whether Jang made the announcement, which will disappoint tens of thousands of female fans, following the advice of his chef.