A passionate, tragic life in rose on stage

A passionate, tragic life in rose on stage 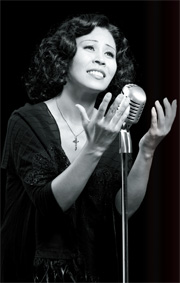 Choi Jung-won plays the title role in “Piaf,” which runs until Monday at the Seoul Arts Center. Provided by Seensee Company

A famous life in rose is now on stage at the Seoul Arts Center, where until Monday musical diva Choi Jung-won plays the title role in “Piaf.”

The play, written by Pam Gems in 1978, depicts the tragedies and triumphs of the story of Edith Piaf, still remembered as one of the greatest artists of the 20th century. Beginning with her rough childhood in the slums of Paris, it shows her rise to stardom, her dark years and, finally, her death. Throughout Piaf’s life, she never strays far from the stage, which Choi was able to relate to easily.

“I am the happiest on stage,” Choi said. “My wish is to end my life on it, like Piaf.” She’s well on her way. Choi has been performing in musicals here for over 20 years.

Piaf, born Edith Giovanna Gassion, was said to be blind from the ages of 3 to 7 before recovering miraculously. From then on, she accompanied her father to street performances all over France, and this was when she first started to perform in public. Louis Leplee, the owner of a bar called Le Gerny, discovered Piaf’s talents on the street and started her professional singing career.

The next year Leplee was murdered, and for a moment Piaf was a suspect, but she soon bounced back.

The driving force of Piaf’s music was the many loves of her life. Her engagement to the French actor Yves Montand became the inspiration to the lyrics of her song “La Vie En Rose,” and the death of her lover Marcel Cerdan led to “Hymne a L’amour.” Though these affairs made her an international star, they left Piaf heartbroken. After Cerdan’s death, she fell into an addiction to drugs and alcohol and suffered a series of near-fatal car crashes.

But Piaf’s story has a happy ending, in the arms of a loving husband 23 years younger, Theo Sarapo.

Choi expressed her desire to incorporate Piaf’s passions into her performance, citing a scene in the Piaf biopic “La Vie En Rose” in which a reporter asks Piaf what she would like to tell women in their 20s, 30s and 40s, and she replies by telling them to fall in love.

“This is how much love was an inseparable part of Piaf’s life,” said Choi. “The more I approach the stage and the audience with actual feelings of love, the more I begin to understand the French chanteuse.”

Since seeing the renowned Korean musical actress Yoon Bok-hee play Piaf in the musical “Padam, Padam, Padam” during her middle school years, Choi said she has never stopped admiring her.

“I’ve wanted this part since I saw that musical many years ago,” Choi said. “The timing is perfect; I don’t think I could’ve done it any sooner, due to lack of experience, or later, because it takes so much out of me.”

For the play’s entire hour and 50 minutes, Choi hardly ever leaves the stage, and in almost half of the scenes, she has to shake her limbs to portray the singer’s addictions.

Though Choi was already known for her good physique and powerful voice, she said she still had many difficulties with the part. She had to work to accurately portray Piaf’s small stature, and her voice had to change to match Piaf’s husky tone.

“I may do everything bad for my health onstage, but I do everything healthy for my body offstage,” Choi said jokingly. “I exercise and train every day on schedule and only eat food that is really good for my body.”

Though this run will end Monday, Choi is scheduled to return to the part again next year.

“Like Piaf, it is okay to have disappointments in your life,” says Choi. “It helps a person not lose their passion. This is what I want to show to all my viewers.”