From aid recipient to donor, Korea turning over new leaf

From aid recipient to donor, Korea turning over new leaf 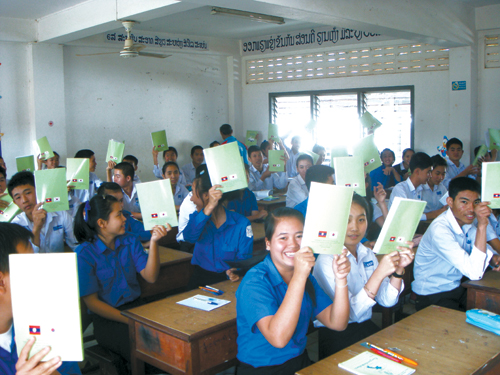 Participants in a program run by the Korea International Cooperation Agency. [JoongAng Ilbo]

For all its economic progress in recent decades, Korea still comes up noticeably short in the ranks of developed countries in one particular area: providing assistance to other nations in need.

In fact, Korea has a reputation of being somewhat stingy in this realm, despite the fact the country relied heavily on outsiders during its march toward industrialization. Since joining the prestigious Organization for Economic Co-operation and Development in 1997, Korea has become a member of nearly all of the group’s 25 subcommittees. The only one it hasn’t yet joined is the Development Assistance Committee. The reason? Korea has not satisfied the international group’s standard for noblesse oblige - measured by its level of aid compared to its economic size.

Now, however, the country is hoping to turn over a new leaf by pumping more money, resources and efforts into aiding other nations. Local officials announced yesterday that the government will boost its budget next year for international aid by a whopping 42 percent as part of its “Global Korea” campaign. Under the plan, the country will hike its official development assistance contributions by nearly 20 percent.

Korea hopes its efforts will be recognized by the rest of the developed world at a special meeting of the OECD’s Development Assistance Committee on Nov. 25 in Paris, France, where members will discuss the possibility of finally accepting Korea into the fold. The move would be a huge coup for Korea, making it a “full” member of the OECD in practice as well as in name.

And officials here think the country stands a good shot this time around.

A fact-finding delegation has visited South Korea twice recently as the committee weighs whether to accept Korea, said Oh Joon, the deputy minister for multilateral and global affairs at the Ministry of Foreign Affairs and Trade, who spoke with the JoongAng Sunday extensively about the topic.

The government has a stated goal of raising its overseas assistance to 0.25 percent of its gross national income (GNI) by 2015. Last year, Korea funneled $800 million into official development assistance, or 0.09 percent of the GNI. It’s a relatively paltry sum: Korea ranks last in such aid among OECD members from a percentage basis. Its assistance level also is just one-third of the organization’s average, and Korea ranks 19th in terms of dollar amount.

Among the 30 members of the OECD, only Korea, Slovakia, the Czech Republic, Poland and Hungary are not members of the Development Assistance Committee.

“The DAC acts as the moral backbone for the OECD system,” Oh said. “The OECD makes up 90 percent of foreign development cooperation worldwide, and it sets standards for aid in the international community.”

If Korea gets the green light, it would become only the second Asian country behind Japan to have a seat on the committee, Oh said, calling such a development “significant.”

The government is putting a particular emphasis on this issue.

The Ministry of Foreign Affairs and Trade, in conjunction with other organizations, hosted the ODA World Conference on Nov. 4 at the Westin Chosun, Seoul. Next year, the country will hold the OECD High Level Forum (HLF), which is expected to draw heads of state and high-level officials from more than 150 countries. The forum, held every three years, is organized by the OECD and the World Bank and ranks as the biggest conference focused on international development.

By becoming the first Asian country to host the forum, Korea hopes to bolster its international image. The nation also will welcome the G-20 summit next year, furthering its presence on the global stage.

Oh said the significance of Korea joining the Development Assistance Committee revolves around the nation’s “unprecedented experience of turning from an aid receiver to a donor as the 13th most powerful country in the world economically.”

After Japanese colonization ended in the mid-1940s, Korea received a total of $12.7 billion (which is equivalent to about $60 billion today) in aid from the international community through the late 1990s. In 1995, Korea was removed from the World Bank’s list of aid-receiving countries.

Korea began aiding other countries in the 1990s by establishing the Korea International Cooperation Agency (Koica), which positioned the country as an “emerging donor.”

But some observers say it has made little progress since. UN Secretary General Ban Ki-moon even called out the country during a visit to Seoul last year, when he said Korea’s foreign aid was at a “disreputable” level.

Other observers say that Korea simply hasn’t made it much of a priority.

“When it comes to landing various events such as the World Cup or the World Expo, South Korea rolls up its sleeves and gets to work,” a diplomatic source who requested anonymity said. “But when it comes to issues such as sending troops for UN peacekeeping efforts or funneling money into overseas development, the country tends to look the other way.”

“Many older Koreans still remember the ravages of war and barely managing to live on relief supplies,” Oh said. “Anyone above the age of 40 can easily recall receiving packages of cornbread or milk powder with ‘UN’ written on them. That’s why Koreans will embrace the fact that we have to repay the international society.”

Still, officials must convince a segment of the population that thinks helping the needy here should rank as the No. 1 priority.

Oh, however, pointed to Norway, which battled with a similar question in the past.

“Compared to other countries in Northern Europe, Norway was slow when it came to advancing economically,” Oh said. “When the government insisted on increasing overseas development assistance, people initially opposed it, saying that their country was not rich enough to help others.

“But the nation as a whole ultimately reached the conclusion that providing foreign aid would provide advantages for Norway.”

Oh said that this is one of the reasons that Korea should focus more on international aid.

“Overseas development assistance isn’t a mere charity that makes you feel better,” he said. “There are benefits at home as well.”

And it’s not as if Korea has been completely absent from lending a hand to developing countries. Koica, for instance, currently has around 1,500 volunteers working in 40 different countries.

John Linton, a professor at Yonsei Medical School who observed Korea’s transformation into a developed country, said it’s time for the nation to take on a more active role globally.

“South Korea can give hope to underdeveloped countries,” he said. “Koreans need to tell the whole world about the miracles that happened in this land.”

The government is taking this to heart, hoping to serve as a model of how a country can shift almost overnight. It also is gearing up to expand its international aid to other areas of the world.

“So far, we have been focusing on giving aid to Asian countries,” Oh said, “but we plan to broaden the region to Africa and Latin America.”