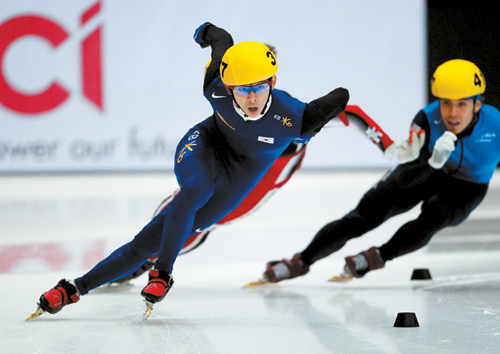 ZURICH - Diego Maradona was banned from all football for two months by FIFA on Sunday over his sexually-explicit rant last month. The Argentina coach, who was also fined 25,000 Swiss francs ($24,691), fell foul of world football’s governing body after losing his cool with journalists following Argentina’s qualification for the World Cup.

Maradona’s outburst came after Argentina’s 1-0 win over Uruguay in October, which allowed the two-time world champions to squeeze narrowly into next year’s finals after a low-key and tense qualifying campaign. The 49-year-old sporting icon, a hero in Argentina after skippering the 1986 World Cup-winning team, told journalists to “suck it and keep sucking it.”

Maradona, who was accompanied by an Argentine football official and bodyguards, did not speak to reporters during his swift passage through Zurich airport and in and out of FIFA headquarters.

A FIFA statement released after a three-hour meeting of the disciplinary panel said: “The sanction applies from 15 November 2009 to 15 January 2010.” During the disciplinary hearing, Maradona “apologized to FIFA and the world football family.”

“The committee took into consideration the apologies and the sincere remorse shown by Maradona in its decision, which was communicated to him at the end of the meeting,” said FIFA.

At the same time, it “stressed” that any breach of the decision or repetition of such action would lead to tougher sanctions. Maradona enjoyed a honeymoon period at the start of his coaching reign before the knives began to be sharpened.

He was widely pilloried for the record 6-1 World Cup qualifier defeat in Bolivia and his relationship with the country’s football-obsessed sports media struggled to recover.

Three more losses - against Ecuador, Brazil and Paraguay - threatened to dump Argentina out of the World Cup picture for the first time since 1970.

Maradona was in a belligerent mood after the Uruguay match, when he launched his tirade against journalists, amid a torrent of other abuse. After the incident he apologized to the world’s women, but refused to say sorry to journalists. AFP