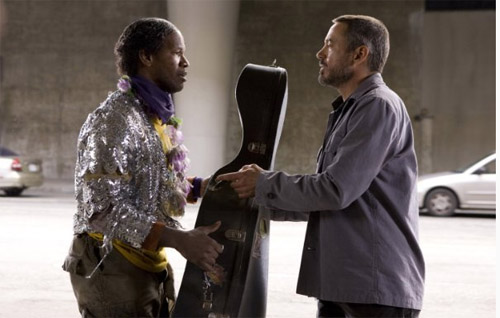 Jamie Foxx, left, plays a talented cello player who has wound up on the streets, and Robert Downey Jr., right, looks to tell his story in “The Soloist.” [MovieWeb]

If you’ve seen the 2008 U.S. film “Tropic Thunder,” starring Ben Stiller, Jack Black and Robert Downey Jr., you know that the film begins with some fake movie trailers, helping establish the backgrounds of the characters in that film as actors involved in some of the most contrived action movies, gross-out flicks, and Oscar-bait coming out of Hollywood.

The U.S. DVD release of Tropic Thunder also includes a sincere trailer for the film, “The Soloist,” about a newspaper reporter who comes across a cello virtuoso who also happens to be homeless. After seeing the preview for what looked like another insipid piece of Oscar-supplication starring a popular actor as a character with mental disabilities, I said as much to my viewing companion.

“Wait,” she said in disbelief. “That wasn’t one of the fake trailers?”

Now, The Soloist has been released in Seoul, and despite my earlier negative impressions, or perhaps because of my extremely low expectations, I didn’t find it all bad. But that isn’t to say it’s particularly good.

Downey stars as Los Angeles Times reporter Steve Lopez, a middle-aged city columnist whose ex-wife (Catherine Keener) is his editor and who is having trouble coming up with ideas.

One day he follows his ears to find a man playing violin in an L.A. park. It’s Jamie Foxx, dressed like an extra from “Breakin’ 2: Electric Boogaloo,” except he’s dirty, so you know he’s homeless. The fiddler’s name is Nathaniel Ayers, and he tells Lopez, in between spurts of incoherent rambling, that he attended Juilliard, the prestigious music conservatory.

Lopez, intrigued by this, digs into Ayers’ past to find out how someone with such obvious talent wound up on the street. The initial story written about this inspires one reader to donate a cello to Ayers.

Lopez continues writing about this yo-yo Yo-Yo Ma, and attention is drawn not only to Ayers but to the homeless population in Los Angeles at large.

But Lopez, and thus the film, are really only engaging in urban poverty tourism. The film shows the character profiting from his profiles of the schizophrenic cellist, but without really damning his lack of remorse. Sure, Ayers is off the streets by the end, but when Downey and Keener are shown dancing around in the closing shots with a bunch of actual downtrodden souls and it’s portrayed as uplifting, the filmmakers seem seriously out of touch.

And while Downey’s performance is par for his course, one thinks he should have repeated a line of advice he gave in Tropic Thunder to Foxx: “Everybody knows you never go full retard.” Foxx’s performance is just another in a long line of Hollywood actors trying to pull off mental disability and only managing an offensive caricature, an unfortunate situation that, like homelessness, will probably not go away anytime soon.