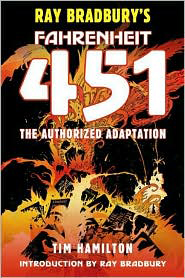 A faithful adaptation of the original, Hamilton’s comics version conveys the social commentary of the novel, while using the images to develop the tone.

He uses grainy, static colors and images obscured by heavy black shadows and textures to portray the oppressive nature of this world where firemen start fires instead of putting them out. Malevolent forces and danger lurk in the shadows pervading the suburban home of fireman Montag and his wife, Mildred.

Montag questions the happiness of his mundane life when prodded by his strange new neighbor, a young girl named Clarisse, as well as his wife’s drug overdose.

This leads him to throw himself into a dangerous struggle to expose the world’s hypocrisy by spreading forbidden knowledge contained in books.

The art solidifies atmospheric elements such as the fire and rain; fire, tapering and curling, is rendered into a crucial additional character.

Since the original expounds the importance of valuing and preserving books and knowledge, adapting it into the comics form emphasizes the growth of the medium, as well as its potency across genres and subjects.