Calm reflection on a master’s creations

Calm reflection on a master’s creations 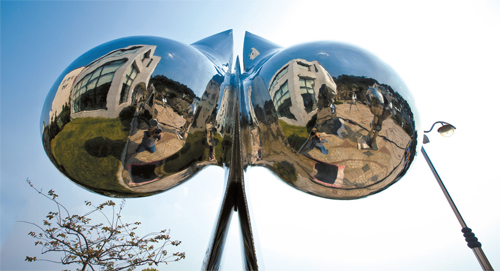 Last summer, a friend asked if I wanted to go to Masan. On the way there, we stopped at the top of a hill. When I asked my friend where we were, I was surprised by her reply. She told me we were at the Moon Shin Museum. I could hardly believe it. “Is it really ‘the’ Moon Shin?” I wondered. But as soon as we stepped through the door, I instantly recognized Moon’s sparkling symmetrical sculptures.

This autumn, I went back there again because I was still haunted by the memory of the master’s artworks.

Masan is Moon’s hometown, and Moon built a house there after returning from his sojourn in France. He built the house stone by stone, selling his art work to pay for the construction. The process took 14 years. It was Moon’s last work, and was completed a year before his death in 1994.

Inside the house, there is a studio with a set of bulky wooden stairs, which Moon also made himself. Outside, there is a serene waterfall and a pond, both of which lie in a pebble-filled courtyard.

Choi Sung-sook, Moon’s wife and the museum director, donated the house and about 3,000 artworks to the city. A new building was added to the property and it is now a municipal art museum.

At some point during my visit, however, I began to feel a sense of regret. It used to be that one could see all of Masan from the museum courtyard on top of the hill, but now the view is obstructed by rows of high apartment buildings. The buildings even made it difficult to find the museum entrance. It is also difficult to reach the museum without a car. Another unfortunate feature is that the atmosphere is quite glum, and the surroundings don’t quite seem to support the majesty of the master’s artworks.

Still, the setting is lovely and provides enough space for quiet reflection on the beauty of Moon’s work.