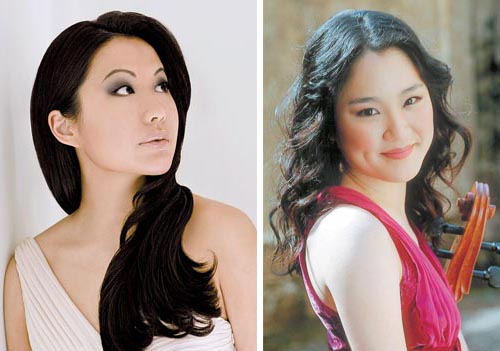 Violinist Sarah Chang, left, and cellist Chang Ha-na, right, will both present solo recitals in Seoul later this month. Provided by the organizers

Years ago, two little girls captured the hearts of audiences in Korea and around the world as child prodigies.

Now these two girls are women, and each one has developed her own identity, and her own sound.

They are Korean cellist Chang Han-na and Korean violinist Sarah Chang, two of the most sought-after classical musicians of their generation.

This winter, fans of classical music in Korea will once again get a chance to marvel at the talents of these two young ladies in solo concerts in Seoul.

Cellist Chang’s eight-concert tour began on Nov. 18 in Gumi, North Gyeongsang, and will conclude on Thursday at Seoul Arts Center in southern Seoul.

The first pieces in the program are Cello Sonatas No. 1 and 2 by Brahms.

“Every time I play his music, I am reminded of what a great composer he is. The passion and tenderness he displays in his music never fails to capture my interest,” Chang said during a press conference in Seoul.

Most recently, the child prodigy-turned-young cellist expanded her musical abilities by conducting masterpieces by Tchaikovsky.

After that experience, she returned to Brahms, the composer who she says has always been an important part of her growth as an artist. Brahms’ Cello Sonata No. 1 was the first piece she played in her first lesson with Maestro Mischa Maisky at the tender age of 10.

“After experiencing what it’s like to be a conductor, I started to think again about what it truly means to be a performer,” she said.

Chang says that one of her lifelong goals is to introduce classical music to a broader audience.

“Brahms has been the most influential figure in my life. As his biggest fan I hope to reveal the magic of Brahms to audiences through his music.”

As a musician, Chang has been characterized by her peers as “playing with honesty.”

Pianist Finghin Collins, who will accompany Chang throughout the tour, jokingly compared her to an athlete for her dedication to her craft.

Meanwhile, violinist Chang will kick off her eight-city tour in Daejeon next Saturday. Interestingly enough, Brahms’s music also figures into her performances. The artist chose the composer’s Violin Sonata No. 3 in D minor, Op.108, as one of the pieces in her repertoire.

“Chang is one of the first collaborators chosen by orchestras worldwide,” said Oh Chae-hwan, an assistant manager at MAST media, the organizer of the concert. “It will be a rare chance to see her perform a variety of pieces in a concert lasting two hours.”

Unlike cellist Chang, who has three Seoul concerts, violinist Chang will give only one concert in Seoul on Dec. 28, also at Seoul Arts Center. The concert is part of her month-long tour of major arts centers around the country.

Meanwhile, the violinist’s record company, EMI Classics, is busy promoting her latest studio album “Sarah Chang: Brahms, Bruch Violin Concertos.” It is currently allowing free downloads of five songs from the album at the Web portal Naver, where the musician is the featured “Special Musician.”

“This is the first time that the Web site has featured a classical musician in its ‘Special Musician’ section,” said Cho Hye-won of the record company.