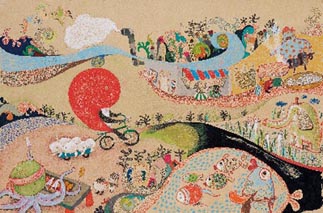 “Whale Soup,” an illustration by Lee Kyung-eui, is currently on display at the CJ Picture Book Festival. Provided by the CJ Culture Foundation


On an afternoon earlier this week, the CJ Picture Book Festival proved without a doubt that children aren’t the only ones who get a kick out of picture books. Small groups of people - most of them in their 20s and 30s - gazed at framed illustrations from picture book artists, while others browsed through some titles on display in another area of the exhibition hall at the Korea Foundation.

“While raising my children, I’ve started to read picture books again,” said Kim Li-ra, the mother of a student in fifth grade, who lives in Gwacheon, Gyeonggi. “They make me feel warm and good. That’s enough to explain why I read them. It’s also interesting to see how picture books are developing in terms of the types of stories they tell and the techniques they use these days.”

While most people associate these types of books - which rely more on illustrations than words to tell stories - with kids, they attract a fair share of interest from older readers as well.

The picture book industry in Korea hit a milestone this year, as the country was chosen as a guest of honor at the authoritative Bologna Children’s Book Fair last March in Italy. In recent years, Korean picture books have been gaining traction both domestically and internationally. For instance “Cloud Bread,” by Baek Hee-na, was published in Germany earlier this year and is also available in other countries including Japan, Taiwan, France and China. Another local title, “Doggy Poo,” by Kwon Jung-saeng, is exported to Japan, Switzerland and Taiwan.

“In the past, most best-selling picture books in Korea were imported ones, but an increasing number of picture books written and drawn by Korean illustrators are loved by children here and overseas these days,” said Choun Sang-hyun, office director of the CJ Picture Book Festival, which is being held at the Korea Foundation in central Seoul through Dec. 24..

The CJ festival, now in its second year, features 50 illustrations and 100 picture books along with a special exhibition highlighting the works of Czech illustrator Kveta Pacovska. The salt-and-pepper haired artist won the Hans Christian Andersen Award in 1992. The award is given to those who excel in the areas of children’s literature.

“I go to galleries, meet children and even get inspiration from pebbles on the street,” Pacovska, 81, said when asked how she keeps her inner child alive.

Along with Pacovska’s drawings, the highlight of the festival is the collection of rare picture books and illustrations from diverse countries including Belgium, Switzerland, Spain, Russia and Iran that are on display.

The city is also preparing to host another exhibition later this month. The Bologna Illustrators of Children’s Books festival will kick off on Dec. 23 at the Seoul Arts Center. It’s aimed at those who couldn’t go to Italy for the book event earlier this year. Featuring Italian guest artist Roberto Innocenti, the exhibition will display 403 illustrations from 20 countries.