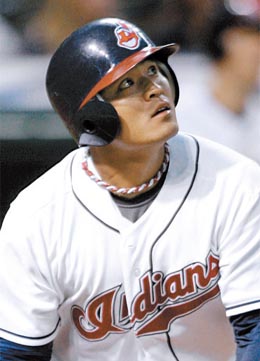 Cleveland Indians right fielder Choo Shin-soo was named the Indians’ Man of the Year by the Cleveland chapter of the Baseball Writers’ Association of America yesterday.

Major League Baseball made the announcement yesterday on its Web site. The 27-year-old was voted over the only other nominee, Asdrubal Cabrera. Choo was one of the only highlights of an otherwise dismal season for the Indians in 2009. The Indians finished the season with a 65-97 record, one of their worst seasons since 1991.

He also led the team in nearly all offensive categories including games played at 153, 583 at-bats, 87 runs scored, six triples, 78 walks with a .394 on-base percentage and .489 slugging percentage.

The 2009 Elias Sports Bureau player rankings placed Choo among the very best in the American League. He was tied for fifth among position players with Bobby Abreu of the Los Angeles Angels. Topping the list ahead of Choo were Mark Teixeira of the New York Yankees, free agent Jason Bay, Nick Markakis of the Baltimore Orioles and Miguel Cabrera of the Detroit Tigers.

Choo broke into the league with the Seattle Mariners in 2005 and was traded to the Indians along with Shawn Nottingham for first baseman Ben Broussard in July 2006.

He received significant playing time in 2008 and showed flashes of things to come in the month of September when he batted .400 with 34 hits, five home runs and 24 RBI.

Choo recently visited Korea for about a month before returning to his residence in Peoria, Arizona on Dec. 5. The right fielder said he will spend some quality time with his family for about two weeks before starting his preparations for spring training.

“I had the best season of my career and I’m confident about my chances of exceeding the past season’s statistics. I prefer to bat in the third spot instead of the cleanup spot in the batting order,” Choo said at Incheon airport, prior to his departure. “Since being traded from Seattle, I have found my place with the Indians, and I’m hoping to hear some good news about my contract.”