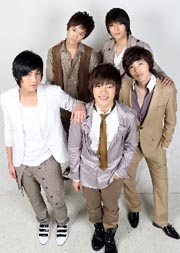 Five Treasure Islands, a.k.a. FT Island, will kick off their first Asian tour on Dec. 23 in Tokyo. The tour also includes stops in Bangkok on Feb. 6 and Taipei on Feb. 26.

Tickets to the 3,000-seat Sun Yat-sen Memorial Hall in Taipei sold out in an hour, according to various sources.

After their debut in 2007, the boy band was an immediate hit with their single “Love Pain.”