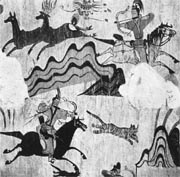 The murals of the ancient Goguryeo tombs scattered around the Pyongan provinces in North Korea were designated as a World Heritage site at the General Conference of Unesco in 2004. In the past, the murals had never come into the spotlight because they were in North Korea, a completely closed country. It was not because of the government of South Korea or North Korea, but the personal effort and influence of Japanese painter Ikuo Hirayama that they were registered as Unesco cultural heritage.

The tie between Hirayama and Goguryeo goes back to 1967. The young painter was stunned when he first saw a photo of a mural of a woman from Susanri tomb, an ancient Goguryeo tomb in North Korea. It struck him that Himiko, a shaman queen of ancient Japan, must have looked similar to her. Based on the inspiration he got from the mural, he started to draw a painting depicting the fantastic image of Himiko and completed it one year later.

Four years later, another surprising incident occurred. In the Takamatsuzuka tomb discovered in Nara prefecture, the ancient capital of Japan, a painting of a beauty that looked exactly the same as the Himiko he painted was found. From then, he started to cherish a belief that the origin of Japanese culture stems from the Korean Peninsula.

In 1997, 25 years after that, he got a rare chance to see the wall plasters of Susanri tomb with his own eyes. In the capacity of a Unesco goodwill ambassador, he visited North Korea. During his visit, he proposed that North Korean officials register the ancient tomb as a world cultural heritage site and persuaded them to perform a site survey and take the necessary preservation measures. As the North Korean authorities lacked in equipment as well as financial means to support the project, they relied almost entirely on Hirayama.

After pleading for help from the Japanese government, he received a government subsidy, but he had to use income from his painting exhibitions to cover the financial shortage for the project. His paintings were sold at the highest price in Japan at that time.

When he sent a thermo-hygrostat to the tomb, it was stopped at the border on the reason that it could be in violation of export control regulations. He had to write a paper guaranteeing that the equipment would not be used for other purposes than preservation of cultural heritage. Owing to his effort of making nine visits to North Korea, dedication to the cause of Unesco and personal efforts to persuade people around him, the Goguryeo murals became the cultural heritage of the world instead of just being the treasure of Koreans.

Then, why did Hirayama devote himself so passionately to the Goguryeo mural? He said: “When I was a grade nine student in Hiroshima, an atomic bomb was dropped there. But I was lucky enough to survive. I have lived with the conviction that human beings should not fight against each other again. Japanese people owed a lot to the Korean Peninsula in ancient times. Helping others through culture and arts has been the motto of my peace movement.”

Those words, which he said in a low voice as a seeker of Buddha, still ring in my ears. He had devoted his life to painting with a Buddhist’s attitude and passed away last week at the age of 79.