The long lineage of ‘The Last Supper’

The long lineage of ‘The Last Supper’ 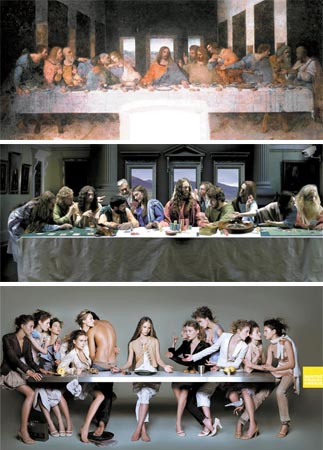 
“The Last Supper” by Leonardo da Vinci (1452-1519) is one of the most frequently modified and parodied paintings in pop culture, often appearing in commercial advertisements.

The original mural is so famous that any ad featuring 13 people at a long table is likely to evoke it. At the same time, parodies of the painting often serve to provoke the viewer, who may feel conflicted about the manipulation of religious imagery. Such mixed feelings make a strong impression, which is exactly what the ad producers want.

In addition, few paintings are so well composed. The 12 disciples, who appear in four groups with three people in each, are symmetrical with Jesus in the center, giving the painting a good balance. Meanwhile, the disciples all take different poses from one another that also compliment the poses of the others in their group, which makes the painting more dynamic. In addition, the painting vividly captures the astonishment and embarrassment that must have prevailed when Jesus said one of the disciples would betray him in the Gospel of John - but the artistic elements remain intact. 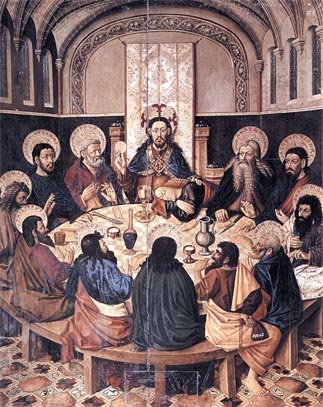 These characteristics have made the painting famous, which has led advertisers to manipulate the image. In general, the Christian church has not been happy with the ads, and in 2005 the Catholic Church took a very hard-line stance against a few of them in particular. One ad was for jeans by the French designers’ group Marithe and Francois Girbaud.

In March 2005, the Catholic Church in France won a court injunction to ban the billboard, which portrays Jesus and most of the disciples as women, with the court ruling that the ad was offensive. A month earlier, the authorities in Milan, the home of the original painting, banned the ad for similar reasons.

I would guess that the thing that upset the Church about the ad the most was that it featured a man in jeans being embraced by two female apostles. Not only is the man naked from the waist up, but look who is in his position in the original painting by Leonardo. The person has traditionally been identified as John the Apostle but “The Da Vinci Code” (2003), the best seller by Dan Brown argues that the person is actually Mary Magdalene.

As offensive as that ad might have been, however, another ad based on Leonardo’s The Last Supper was likely seen as even more disrespectful. In late 2005, Paddy Power, an Irish company operating a gambling site, launched an ad campaign in which Jesus is shown playing cards with the apostles amidst a table littered with poker chips. This ad also shows the influence of The Da Vinci Code, as the person sitting in the controversial position of Mary/John is a woman. In the end, the company withdrew the ad following protests in Ireland, particularly from the Catholic community.

Like these, the characteristics of other ads based on Leonardo’s The Last Supper in the mid-2000s seem to reflect the popularity of the novel The Da Vinci Code. So how dependable is the novel’s view about the identity of the figure next to Jesus in the painting?

The novel emphasizes the figure’s feminine appearance. However, that is actually no surprise, considering the iconographic tradition followed by Last Supper paintings made by Leonardo and other painters from the Middle Ages, Renaissance and Baroque eras. Even before Leonardo, painters including Jaume Baco Jacomart (1411-1461) portrayed John as a feminine-looking youth in their Last Supper paintings and put him right next to Jesus. Why?

Chapter 13, Verses 21-25, of the Gospel of John offers some hints: “When Jesus had thus said, he was troubled in spirit, and testified, and said, Verily, verily, I say unto you, that one of you shall betray me. Then the disciples looked one on another, doubting of whom he spake. Now there was leaning on Jesus’ bosom one of his disciples, whom Jesus loved. Simon Peter therefore beckoned to him, that he should ask who it should be of whom he spake. He then lying on Jesus’ breast saith unto him, Lord, who is it?” (King James Version)

The disciple “whom Jesus loved” is John, who is generally regarded as the author of the Gospel of John. At this point, many readers will presume that John is a relatively young and sweet young man. Or, imagine if John, as a middle-aged man with a long beard like Peter, whispered a question “lying on Jesus’ breast.” I’m sure that most artists would rather break their brushes than paint such a scene.

Also, there are only 13 figures in Leonardo’s The Last Supper, so if the person in question is Mary Magdalene then one disciple is missing.

The Da Vinci Code’s interpretation has been received as plausible, perhaps because the public is not familiar with the large number of Last Supper paintings by artists other than Leonardo and because the iconographical tradition behind the paintings is also little known.

Of course, Leonardo’s work is a masterpiece. But there are many other beautiful and interesting Last Supper paintings out there, and it is a shame that so few of them are known.