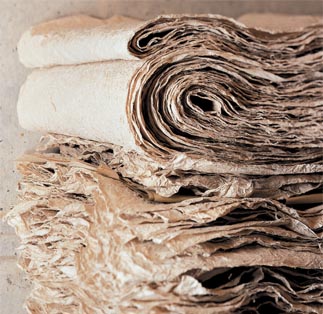 Hanji, or traditional Korean paper, has slowly been making its way back into the daily lives of Koreans over the past few years.

While it was once an irreplaceable aspect of life in Korea, it is now being marketed as an environmentally friendly product, working its way into everything from clothing and credit cards to lamp shades and audio speakers.

So perhaps it’s not too surprising that Hanji Park is set to open in Wonju, Gangwon in March of next year. It’s a fitting location for the park, as Wonju, the second-most populated city in Gangwon, is considered one of the leading producers of hanji and even hosts an annual festival based around the traditional Korean paper.

The new Wonju Hanji Park - which features an exhibition hall, a museum, a performance hall and an outdoor stage, among other facilities - will host the festival starting next year. Wonju city officials announced late last month that the 26,309-square-meter (6.5-acre) park that underwent construction in 2003 is near completion. It cost the city a total of 17.2 billion won ($14.79 million) to build and is expected to provide a significant boost to the annual Hanji Festival, which highlights the paper through various exhibitions and hands-on displays as well as workshops and seminars.

The International Association of Hand Papermakers and Paper Association general meeting will also be held there in September of next year. A Wonju city official said that having the necessary venue and research facilities will enhance the chances for the hanji industry to grow in the future.

“The museum is at the core of Hanji Park,” said Ju Mi-young of the city’s Strategic Industry Division. “We will continue to collect hanji-related artifacts and exhibit them in our museum. The overall goal of Wonju is to educate and introduce the importance of hanji to the public.”

Aside from informing the public about the positives of using hanji products, city officials are keen on lending a hand to the effort of further developing hanji-related products. Wonju has opened a center to develop the traditional industry on the campus of Sangji Youngseo College. The center, built on a 12,753-square-meter plot of land at a cost of 7.45 billion won, contains 18 research laboratories, a convention hall and seminar rooms. Wonju city officials plan to further develop the area to accommodate companies that produce everything from wallpaper and automotive interiors to toys.