The sun, in all its glory

The sun, in all its glory

People watch the sunrise on Haeundae Beach in Busan on Jan. 1, 2009. By Song Bong-geun

The sunset and sunrise hold a special place in the hearts of many people across the world, particularly Koreans.

To some, looking at the sun sink at dusk provides a way to come to terms with the past and an opportunity for closure. To others, watching it slowly peek up over the horizon at dawn can spur feelings of hope and courage.

If you’re not so moved, however, it’s hard to argue against the notion that the sunset and sunrise are just plain pretty to look at.

Each year, many Koreans travel to coastal areas of the country specifically to see the sunset or the sunrise, or even both. Parents bundle up their children and pack up their cars for weekend trips, while couples book rooms in romantic seaside hotels.

By now, accommodations in those regions, especially on the east coast, are already filling up. On New Year’s Eve and New Year’s Day, the areas will be packed with crowds of revelers who arrive on trains and buses and in cars to see the sun set on one year and rise on another. Some of those who cannot find accommodations choose to sleep in their vehicles or in jjimjilbang, or Korean saunas.

To capitalize on this trend, regional governments are preparing sunset and sunrise festivals, hoping to enhance the experience for visitors. Sure, no one likes traffic jams and overpriced - not to mention overcrowded - hotels. But many feel it’s worth it just to catch a glimpse of the sunrise and sunset. For those who can’t afford the trek to the coasts or simply don’t have enough time, there are plenty of mountains, hills and even beaches near the metro area to catch the views. Following are some of the best places to do so this winter. 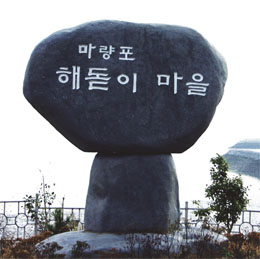 While many people travel to Korea’s east coast to see the sunrise, this small harbor town in Seocheon County, South Chungcheong, on the west coast is famous for offering a similar opportunity - plus a chance to see the sunset on the same day, as it is located on a swath of land that protrudes south into the sea.

The sunrise here, however, can only be seen for 60 days prior to and after Dec. 22. An endless stream of tourists trickle into the quiet harbor at the end of each year for just this reason.

On Dec. 31 and Jan. 1, Seocheon County holds an annual sunset and sunrise festival. Participants can gather together to watch the rising sun to the sound of drums, which organizers say carries a message of love, forgiveness and reconciliation. Another attraction in Maryangpo is the 500-year-old camellia forest. When the camellia flowers are in full bloom in mid-April, the forest turns into a sea of red. Following stone stairs into the forest, you’ll see a pavilion, called Dongbaekjeong, where the Yellow Sea unfolds in front of you.
Gazing out at the sea here can be an amazing experience, and many visitors compare it to looking at a landscape painting. Aside from the small picturesque islands and the forest, the colors and light at sunrise and sunset are some of the most vibrant and breathtaking on the west coast.

Additionally, if you head here for Lunar New Year’s Day and the third day of the Lunar New Year in mid-February, there will be ceremonies focused around praying for an abundant fish harvest.

Take a train at Yongsan Station (Janghang line) to Seocheon (3 hours and 20 minutes). For drivers, take the West Coast Highway, pass by Pyeongtaek, Asan, Gwangcheon and Daecheon until you hit Seocheon.

With its fantastic rocks and jade-colored water, Chuam Beach draws visitors from far and wide for the sunrise on New Year’s Day. 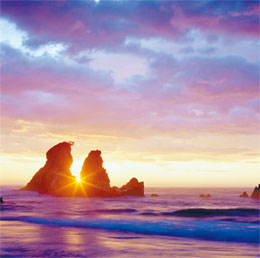 The sunrise from Chuam Beach

The beach, located near Donghae, Gangwon Province, is so beautiful that national television broadcast stations show shots of it against the backdrop of the Korean national anthem every day when they go off the air after midnight and just before they go on again every morning. The color of the rocks changes as the sun slowly rises above the sea, illuminating the landscape and leaving a lasting impression on visitors.

After sunrise, visitors can walk around the spacious white beach, which is shaped like a crescent moon. The Haeamjeong pavilion is a great place to observe the sea. Surrounded by rocks, the pavilion was built to ensure that it creates harmony with the surrounding environment.
Its history dates back to 1361, when a government official named Sim Dong-ro of the Goryeo Dynasty (918 -1392) became fed up with politics. He returned to his hometown and later built the pavilion to capture the peace and tranquility of the area. Other attractions and sites include Mount Duta, Mureung Valley, Cheongok Cave and Mangsang Beach. For details, call (033) 532-2801 or go to www.dhtour.go.kr.

Take the Yeongdong Highway to the Donghae Interchange, follow the signs to Donghae, then turn left at the three-way crossing and continue on the road until you get to Chuam Beach in Bukpyeong-dong.

Hyangilam Temple in Yeosu, South Jeolla is considered one of the best spots for watching the sunset - at least that’s what the locals say. This is also one of the most popular temples among Buddhists for praying. 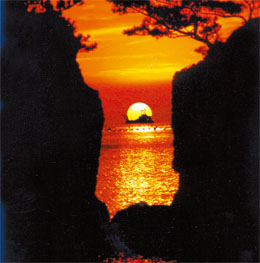 The temple is located on top of a cliff on the coast that faces south. Its name derives from a Korean word that means “facing the sun.” The temple is surrounded by beautiful scenery, and viewing the sunset with the sound of temple bells ringing in the background is quite special. Right below the steep cliff lies the vast blue sea, further enhancing the allure of the place. While the views are grand, the temple itself is rather small and humble.

While watching the sunrise early in the morning at the main building of the temple, which is situated 150 meters (492 feet) above sea level, visitors will see a dab of red above the water spread along the horizon.

The temple then shines as it reflects the morning sunlight, which monks say highlights their unchanging belief in Buddha’s teachings. This is also a popular place throughout the year with mothers who come to pray for their children taking the college entrance exam.

The temple holds an annual festival on Dec. 31 and Jan. 1 to celebrate the New Year holiday, featuring various events including a parade and a shamanistic performance. The festivities kick off at 5 p.m. on Dec. 31, with the sunset expected to begin at 5:28 p.m. Monks will also hold a bell-ringing event as the clock nears midnight.

Trains to Yeosu, South Jeolla, depart from Yongsan Station. For those who prefer to drive, take the Gyeongbu (Seoul-Busan) Highway to the Cheonan-Nonsan Highway, follow that until the Honam (Jeolla Provinces) Highway, then take the Suncheon Interchange to the 17th National Highway and continue until you hit Yeosu.

Festivals and events a bit closer to home


If you’re looking for somewhere closer to home, there are several areas in and around Seoul that provide opportunities to see the sunrise and sunset such as Mount Acha in Gwangjin District, Mount Namsan in Jung District, Sky Park in Mapo District and Mount Bukhan in Gangbuk District. For those in Busan, Haeundae Beach is a great spot as well.

Every year, more than 40,000 people come to Mount Acha to welcome the New Year at a sunrise festival that takes place in the pavilion on top of the mountain. To reach Mount Acha, go to Gwangnaru Station on line No. 5, exit 2. For more information, call the Gwangjin District Office at (02) 450-7574. A similar festival is scheduled at Sidan Peak on Mount Bukhan at 6:40 a.m. Go to Suyu Station on line No. 4, exit 1, and transfer to bus No. 1.

For those living in and around Busan, the city has scheduled festivals at Haeundae and Dadaepo beaches and at Yongdusan Park. For details, call (051) 888-3392 or visit www.festival.busan.kr.