Actor takes to the skies for his new film

Actor takes to the skies for his new film 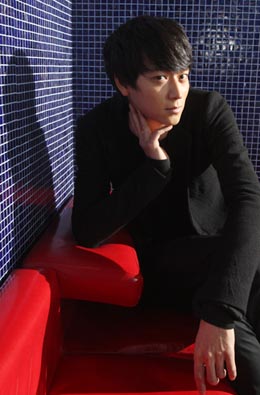 Before he appeared in “Jeon Woo Chi: The Taoist Wizard,” Gang Dong-won was known for his roles in serious movies like “Duelist” and “M,” but says he “had so much fun making this movie.” By Kim Seong-ryong

‘I virtually lived up in the air for half of the eight-month production period.’

Actor Gang Dong-won has returned to the big screen with “Jeon Woo Chi: The Taoist Wizard,” the first motion picture made about the legendary Korean character. The film opened in local theaters yesterday.

The movie by director Choi Dong-hoon of “The War of Flower” (2006) is based on the Korean folktale “The Tale of Jeon Woo-chi,” which is about a mischievous Taoist magician from the Joseon Dynasty (1392-1910).

“I had so much fun doing this movie,” said Gang, who played the title character. “I sort of wanted to romp around, which I actually did.”

The 27-year-old is better known for his roles in serious movies like “Duelist” (2005) and “M” (2007), both by director Lee Myung-se, and he played a death-row convict in the 2006 film “Maundy Thursday” - the role that made the taciturn guy even more quiet than usual.

Gang was Choi’s top pick for the role, and the director once said that the childlike mischief behind Gang’s calm, clear-cut features would make him perfect for the part. However he also worried whether Gang would want to participate in such a “wild fantasy” movie after having established himself as a serious actor. But Gang said he was actually pleased with the idea.

“I was instantly attracted to the story, which Choi told me about when we met two years ago, featuring this character who flies around Seoul and fights off goblins - which may be because I am a big fan of animation,” said Gang.

In the initial draft, there were scenes in which Jeon goes to the North Pole and gets into a fight at Sungnyemun (also known as Namdaemun, or the Great South Gate) in Seoul. To the actor’s disappointment, however, the scenes were excluded from the final script following the release in February 2008 of the Hollywood sci-fi movie “Jumper,” which features a character flying around the world transcending time and space, and the fire that destroyed the gate that same month.

“I didn’t actually know who Jeon Woo Chi was, because you know, he’s not a traditional, historical figure in textbooks,” the actor giggled. “However, I was more drawn to the character after I realized that he is not a righteous hero, but an antihero,” he added. “During the shooting I concentrated on creating a character that people would take to.”

“I virtually lived up in the air for about half of the eight-month production period.”

That’s no wonder, considering that about 60 percent of the scenes in the movie involve suspension work. The action scenes were filmed at high altitudes near mountains and streams but also high above locations in central Seoul, including places in Insa-dong, Cheonggye Stream and Tehranro.

“I was scared and sometimes felt nauseous - there were even times when I had to go up as high as the fifth floor of a building with just a single wire to support my body.”

Gang lost 8 kilograms (17.6 pounds) during the production period because he “shivered so much with cold and fear doing the aerial stunt work,” as he put it.

This is Gang’s seventh film and the first he expects to be commercially successful.

“My last film M was not very successful commercially,” he said. “There must have been people who invested in the film who were anticipating that I would attract profits, so I felt kind of sorry about that.”

Concern about his popularity is new for the actor, who didn’t seem interested in money or popularity in the past. Now, he has a new request for his fans: that they love him.