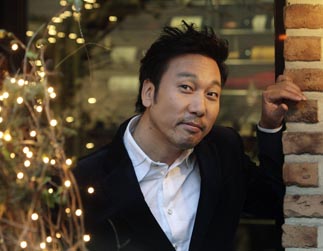 Lee Moon-sae, 50, has found a new lease on life this year on tour around the nation. By Choi Seung-shik

Lee Moon-sae may not be a familiar name to younger Korean pop music fans because he is an old-time singer who debuted in 1983. However, to many members of an earlier generation, Lee still remains a solid musician boasting 14 regular albums and many hits such as “Gwanghwamun Love Song,” “Flying in the Deep Night” and “Red Sunset,” the last of which was a hit again last year when it was covered by the popular boy band Big Bang.

This year Lee’s daily schedule has revolved around getting ready for his national tour, which kicked off in September. Every day after he finished his regular two-hour radio program “Good Morning, This is Lee Moon-sae,” starting at 9 a.m. on MBC FM, Lee headed over to the gym to do weight training. He cut down on alcohol and walked along mountain trails once a week. He even declined to go on television programs to maintain a healthy routine for his physical well-being.

“The year before last, after I fainted while I was getting ready for a concert, I thought I really needed to strengthen my body if I wanted to continue to perform,” Lee said. “That year, I was supposed to hold a performance at Yonsei University, but I passed out and had to be checked into the university’s hospital. I remember looking out of the window where I was hospitalized to see my fans waiting outside for my performance. I felt so bad, and that’s when I realized that I needed to get healthier and take care of myself.”

This dedication and change of heart could explain why tickets for his ongoing tour, “2009 Lee Moon-sae, Red Sunset” have sold out in 10 cities. However, according to the 50-year-old, his national tour was initially considered a bit of a risk.

Lee had been mostly performing in small venues for the past 10 years when he decided to headline a show in front of about 4,000 to 10,000 fans. Many of his friends tried to talk him out of the idea, Lee said.

“They were worried that someone like me, who is old and hasn’t had a recent hit as singer, would not draw big enough audiences,” he said. “But I didn’t want to stay in a lull, so I decided to get a fresh start and show my fans a new and improved performance.”

And after his first performance in Seoul gathered 10,000 of his fans, his worries went away.

When asked if he has any new goals at the age of 50, Lee said he wanted to put on a concert that people would want to see before they die.

“It would be even better if I could inspire those in their 40s or 50s with my performances, during which I always do my best, even breaking out into a sweat,” the veteran singer said.

Lee’s long tour comes to a close with “Red Sunset at Christmas” concerts, from yesterday through Dec. 26 at Ewha Womans University. The year-end concert is scheduled for the final day of the year in Busan’s Bexco.