A debt owed to General Walker

A debt owed to General Walker 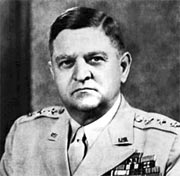 Gen. Walton Walker (1889-1950), the commander of the U.S. Eighth Army, provided the foothold for the Incheon landing by defending the 240-kilometer-long (149.1 mile) front line along the Nakdong River from Yeongdeok to Masan, spanning 160 kilometers north to south and 80 kilometers east to west. He set foot on Korean soil on July 13, 1950. As the military situation turned against the U.S.-South Korea joint forces, under the auspices of the United Nations, the commander of the U.S. 25th Division gave an evacuation order on July 29.

However, according to a book on the Korean War written by Kim Haeng-bok, General Walker rushed to the front line and gave a strong order: “Stand or die! ... We are fighting against time. What is at stake is whether the North Korean army occupies Busan first, or the U.S. enforcements Gen. Douglas MacArthur promised will land on Korean soil first. From now on, there is no evacuation or retreat. There is no more room for retreat. Retreating to Busan means a massacre of the largest number of people in history. Therefore, we have to fight till the end. Being a prisoner of war is even worse than sacrificing our lives in the battle. Yielding even an inch of land to enemy hand is not rewarding the sacrifices thousands of our comrades have made.”

It was only because General Walker determinedly defended the Nakdong River front line with the order “Stand or die!” that Koreans could sing a war song, which goes: “We march forward and forward/ over the bodies of comrades./ Farewell to the Nakdong River./ We are marching on/ after defeating the enemy./ Our grudge smolders in our blood.”

He saved the fate of a newly born republic that was on the brink of collapse. At that critical moment, he was with us.

Although the South Korea-U.S. forces advanced to the Amnok (Yalu) River, the military situation turned against us due to the intervention of the Chinese Army. On Dec. 23, 1950, General Walker was on his way to deliver the Enseong Military Medal to his son. President Syngman Rhee awarded the medal to Walker’s only son, Capt. Sam Walker, who served with distinction in warding off the offensives of the Chinese army. Unfortunately, he was in a traffic accident near Uijeongbu and was killed at the age of 61.

In memory of General Walker, the hill near Gwangjang-dong, Gwangjin District, where there were leisure facilities for the U.S. Forces Korea, was named Walker Hill. At the foot of the hill near the main entrance to the Sheraton Walkerhill Hotel stands a commemorative monument on which is written: “We Koreans cherish the memory of General Walker because he was the only person who insisted on defending the Korean Peninsula, when the atmosphere in Washington in the early stage of the Korean War was complete withdrawal of all United Nations Forces from the peninsula.”