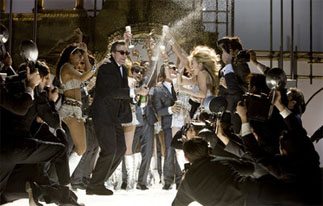 ‘Nine,’ the new movie musical with an all-star cast tells the story of a famous film director (Daniel Day-Lewis) who turns to the women in his life for comfort and advice. [MovieWeb]

After I left “Nine,” - a musical about style and love set within the golden age of Italian cinema, with a cast of no less than six Academy Award winners - I was confused. What was the title referring to? Why did it have to be a musical? Why was I subjected to Kate Hudson’s singing voice for a second time over the closing titles?

It was, broadly, about a man facing a crisis turning to the women in his life, only to find out that he doesn’t understand or appreciate them the right way. On top of that, he’s Italian, a status that apparently comes with all sorts of complications.

Daniel Day-Lewis plays the famous and ostentatious film director Guido Contini. Guido is just 10 days away from rolling camera on his latest film, “Italia,” and expectations are high for the grandly titled film, but he hasn’t got the slightest clue what the movie will be about, much less a line of script put to page. He retreats from Rome to a resort on the Italian seaside, only to be followed by the production crew he’s trying to escape.

The movie is an adaptation of a musical that’s an adaptation of Federico Fellini’s “8 1/2,” which I woefully have not seen. The title referred to the quantity of Fellini’s body of work to that point; the creators of the musical considered their take on it to be the next half step.

Guido seeks guidance from the women in his life in his head, on the set and in the bedroom. In turn, he explores his relationships with each of these women in song. Director Rob Marshall presents each song in the same way he approached “Chicago” in 2002, a cabaret style that is concurrent to but distinct from the rest of the film. I have to admit, I’m not a fan of his style; I like my musicals integrated, with the cast breaking out into song in the street without a single raised eyebrow, all of the passersby preternaturally aware of the choreography.

That style almost forces questioning the necessity of the songs to the film. Remove them from this film and it would just be a remake of 8 1/2. And, as my sensible viewing companion pointed out, remove the songs and the film would be a pretty sexist spectacle. The songs gave the females their depth; those characters otherwise didn’t really express anything else besides beauty and spread legs.

Among these musical interludes, Marion Cotillard as Luisa, Guido’s wife, stood out. Her husband had made her a star and then suppressed her beneath his shadow, all the while ignoring her in favor of his work and other women. When she expresses all of this pent-up frustration, she appears as a stripper at a burlesque show, her anger conveyed exceptionally through movement.

On the other hand, you have Kate Hudson as a brackish American reporter with a foul laugh and makeup layer-caked upon her face. She sings about how much she loves “Cinema Italiano,” and for a song that’s about style, it completely lacks any. Her voice is so grating and tone-deaf that they probably should have run her through an auto-tune. And because her lamentable number is played over the closing titles, the film left a remarkably bad taste in my mouth, and unfortunately no other song was catchy or memorable enough to remedy Hudson’s travesty.