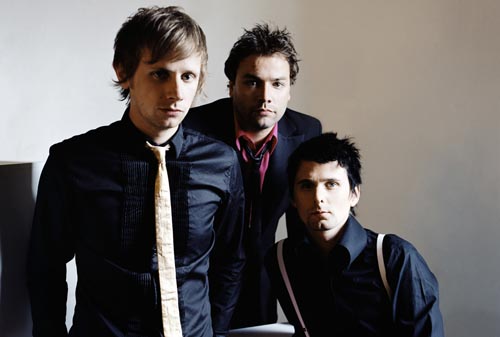 Having first struck the piano keys at the age of 3, Kim had won most of the major domestic piano competitions by age 10. He skipped high school to enter the Korea National University of Arts and study under the distinguished pianist and professor Kim Dae-jin. By age 18, he had made headlines for winning major international piano competitions.

Tomorrow: “Muse: The Resistance Tour in Seoul.” 2010 will get off to a rocking good start when British arena rock group Muse returns to Seoul for their long-awaited concert tomorrow.

Muse are known for their energetic and extravagant live performances and their fusion of many music genres, including progressive rock, classical music and electronica. Muse has released five albums including “Black Holes and Revelations” in 2006, which earned the band a Mercury Prize nomination and a third place finish in the NME Albums of the Year list for that year.

With critics comparing their latest album to that of the band Queen, the Olympic Park Gymnasium will be the optimal venue for the band’s front man Matthew Bellamy to go for the dramatic.

This concert, which features 70 minutes of Beethoven’s symphony “Choral,” will be the final program in the Seoul Metropolitan Youth Orchestra’s three-year series titled “Beethoven Stories.” The Beethoven symphony Choral, which has been recognized as one of the most outstanding masterpieces among Western classical music, is part of Unesco’s Memory of the World register.

Chen Xi, famous for winning the top prize at a Tchaikovsky competition with an injured arm, will be showcasing his talent in front of a Korean audience for the first time during this concert.

Jan. 12: “Gangnam Symphony 2010 New Year Concert.” The Gangnam Symphony Orchestra will celebrate the new year with a concert next week. Cellist Lee Yu-jeong and pianist Jo Jae-hyeokl will perform in this concert, conducted by Suh Hyun-suk.

Joining the orchestra as a special guest is flutist Julien Beaudiment. Born in 1978, Beaudiment studied at London Guildhall School of Music and in Paris.

Green Day is an American rock trio formed in 1987. The band was originally part of the punk rock scene in Berkeley, California. Its early releases for independent record label “Lookout! Records” earned them a grassroots fan base.

The band’s major label debut “Dookie” (1994) became a breakout success and eventually sold over 10 million copies in the U.S. and 15 million copies worldwide.

This heartwarming story takes place in the two kingdoms of Bohemia and Cecilia, and revolves around love and jealousy, farewells and encounters, and forgiveness and reconciliation.

The performances begin at 2 p.m. on weekdays and Sundays and at 2 and 5 p.m. on Fridays and Saturdays.

To March 24: “White Crane Dance.” Located inside Namsan Hanok Village, Namsan Gugakdang has made a name for itself as a center of traditional theater and song in Seoul.

On Wednesday nights through March, Namsan Gugakdang will present the “White Crane Dance” as part of its regular program.

At today’s inaugural event, in addition to the regular performance, artist Gu Young-hee will be making a special guest appearance.

As the director of the Korean Dance Society and a professor at Kyungsung University, Gu Young-hee will demonstrate several traditional dance forms, including musanhyang, hyangbalmu and halryangmu.

Jan. 12 to 13: “Etoile Ballet Gala.” This gala performance will feature some of the biggest stars in ballet and beloved ballet works, including “Don Quixote” and “The Dying Swan.”

Accompaniment will be provided by guest artists including piano prodigy Kim Sun-wook and violinist Jang Woo-jin.

Pianist Kim, 21, has won major international piano competitions throughout his career, including the 2004 Ettlingen in Germany and the 2005 Clara Haskil in Switzerland.

He was Asia’s first winner of the 2006 Leeds prize, becoming the world’s youngest winner in 40 years.

To Feb. 21: This winter, Seoul’s only four-season outdoor theme park, Supia, is hosting the Supia White Festival on its grounds.

In the spirit of the holidays, the entire facility will be covered in white snow.

People can make snowmen in a large snow field or go sledding at “Ice Village.”

To Jan. 31: The Pyeongchang Trout Festival will continue through the end of the month in the town of Jinbu-myeon in Pyeongchang District. Visitors to the festival can enjoy a variety of programs including ice and lure fishing for trout, snow programs, ice programs, folk programs and more.

There will also be traditional folk games including sledding and top spinning, and visitors can try out sports such as riding four-wheel ATVs, snow rafting and sleigh trains.

Any trout caught via ice and lure fishing can be prepared right away at a nearby restaurant.

Saturday to Jan. 17: The International Association of Theater for Children and Young People, or ASSITEJ, has hosted the ASSITEJ Winter Festival for the past six years.

It is the largest youth theater festival in Korea.

The companies in the festival use their imaginative visions to guide their stories.

This year’s festival will feature eight works, four of which are presented by international theater companies and four presented by domestic groups.

The stories vary from remakes of traditional Korean folktales to sci-fi puppetry.

The festival’s opening piece is “Blue Hour,” which advocates a pro-environment message through a presentation of the problems facing Korea’s swamps and mudflats. The production was created through a collaboration between young artists from Vietnam, Taiwan and Japan.