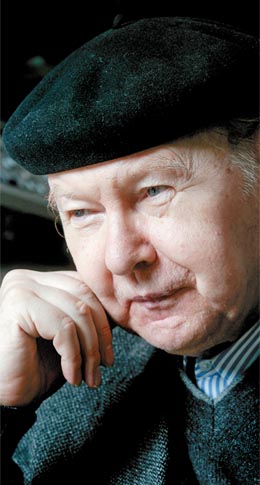 Waegwan, North Gyeongsang, a small, sleepy village about 270 kilometers (168 miles) southwest of Seoul, is well known for its Catholic monastery, built during the Korean War in 1952.

But the Waegwan Abbey, one of the oldest Catholic monasteries in Korea and home to more than 100 priests and Catholic monks, has become famous for an unusual reason - its collection of classic European films, a rarity in Korea.

Father Sebastian (born Heinrich Rothler), a German priest who has been a fixture at the monastery since 1968, is the guardian of this precious collection, encompassing not only religious movies but also art house films that may no longer be available at DVD shops crowded with the latest Hollywood blockbusters.

For more than three decades, Father Sebastian has imported and played foreign films here, on a self-proclaimed mission to spread messages of hope, love, freedom, justice and salvation.

“Finding good movies is like finding a treasure in a dark forest,” Rothler said, surrounded by stacks of DVD boxes at the abbey’s Benedictine Audiovisual Center, which he has headed since 1993. Here in the small, humble studio, he busily copies, packages and sends out DVDs ordered by customers with two employees and other volunteers. Copies of films by Andrei Tarkovsky, Ingmar Bergman and Ken Loach - even Frederic Back’s classic animated film “The Man Who Planted Trees” - are strewn everywhere. The studio has about 60 films available on DVD and often VHS as well, ranging from Tarkovsky’s masterpiece “Solaris” and Federico Fellini’s “La Strada” to rare footage of Korea in the 1920s, filmed by a German priest.

The 73-year-old Rothler’s passion for film dates back several decades to when as a young student he first fell under cinema’s spell. Studying religious psychology at a college in Munich, Rothler learned that church wasn’t the only place one learns about religions - the same messages could be spread through music, books, opera, photography and other media. His favorites were images and movies.

“I saw all kinds of movies, from South Africa, Latin America, and even Japan and Indonesia,” Rothler said. Munich, a famous college town, hosted movie directors and critics at countless forums and events back then, and the young aficionado didn’t miss a thing.

After he became a priest in 1965, Rothler met another priest who had served in Wonsan, now in North Korea.

“He told me how beautiful a country Korea is, and how Koreans are kind, delightful and smart,” Rothler said. Young European students at the time were also beginning to take more interest in the third world, and Rothler finally left for Korea in 1966.

The country, then under military rule, had no guarantee of free speech, let alone a film market open to controversial issues regarding society or politics.

“I brought in some socially critical movies, like ‘On the Waterfront,’ or Charlie Chaplin’s ‘The Great Dictator,’ and showed them in colleges or small movie forums,” he said. “I thought it was right [to show such movies to people] because there was no freedom in Korea back then, and people wanted to watch movies about social justice.”

But with even college campuses under the watchful eye of plainclothes police officers, Rothler had to be extremely careful. The students who wanted to see his films would set the exact minute Rothler had to arrive at some basement on campus or another secret location. Then he would be ushered, film can and projector in tow, into a tightly guarded classroom where dozens, sometimes hundreds, of students would be eagerly waiting for his arrival in dead silence and pitch-black darkness.

“I mostly showed movies about labor unions like ‘Waterfront,’ or some Tarkovsky movies .?.?. but they were considered socialist movies by society back then,” he said.

After being assigned to lead the Benedictine Audiovisual Center in 1993, Rothler rolled out an even more ambitious plan - officially importing foreign classic films and selling the copies to film fans.

Though well known in die-hard circles, these movies could only be found at that time in dusty piles in the back of old rental shops, and then only if they’d been imported at all.

Yet the timing was perfect, given the renewed popularity of the old movies among young people in the giddy, liberated 1990s. Budding movie buffs abounded, all searching for old classic films they could brag to their friends they’d seen.

So the Benedictine Audiovisual Center soon became a famous fixture among local fans longing to learn about Bergman, Tarkovsky, Fellini and their ilk.

But the center’s collection isn’t just the modern cinematic canon. It also includes a long list of religious-themed movies, including one about a legendary Catholic missionary who lived in remote Latin American forests, and the award-winning German documentary “2,000 Years of Christianity.”

“I not only look at the message and plot but also see the film’s image quality, like composition and camera work,” Rothler said.

“No matter how good the theme is, I don’t select it unless it has some quality from an aesthetic viewpoint,” he said, adding slyly that ‘2000 Years of Christianity’ was a perfect antidote to movies like “The Da Vinci Code.”

The center also brought to Korea what Rothler says was the first real film footage with images of the country taken back in the ’20s. The new DVD, titled “The Land of Morning Calm,” is based on 15,000 meters of raw film recorded by Father Norbert Weber, who visited Korea in the 1910s and ’20s when the country was under Japanese occupation.

The film shows long-lost images of the early 20th-century Korean Peninsula, before the Korean War separated the North and South. The images include women spinning on cotton wheels, families making traditional tteok rice cakes, a look at Dongsomun (Seoul’s ancient East Gate), which was destroyed just years later, and missionary activities in what is now North Korean territory.

The footage was once stored in a German monastery, but later the Nazi government, which sided with Japan in World War II, tried to confiscate it, Rothler said, because some of it could be interpreted as espousing a critical view toward the Japanese occupational regime in Korea.

Fortunately, a monk saved the film, hiding it behind a stone wall in the basement before he died during the war. The film was rediscovered in 1975 during a renovation.

For details about the Benedictine Audiovisual Center, see www.benedictmedia.co.kr or call (054) 971-0630.