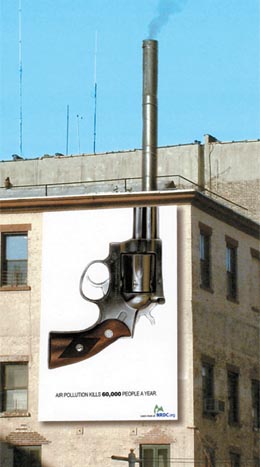 Korean designer Yi Je-seok won a gold medal in 2007 for this public service ad, which was created to raise awareness about the dangers of air pollution. Provided by the organizer

Several decades ago, Korea lagged behind in the field of industrial design. Korean goods were advertised as inexpensive and sturdy. But that was all. These days, however, a new group of young Korean designers has started to make a name for themselves, winning international design awards and attracting the attention of the international design community.

The new exhibition, “The Winner and the Designer,” which is being held at Gallery Iang, displays the work of five of these young artists, who are changing the map of Korean industrial design.

The five Korean designers - Yi Je-seok, Seol Euna, Song Won-june, Park Sung-woo and Jeon Jin-soo - are all in their 20s and 30s. As individuals, they have won some of the world’s top design prizes, including the IF Design Awards (given by International Forum Design in Hannover, Germany), the International Design Excellence Awards (given by BusinessWeek magazine and Industrial Designers Society of America), and the Red Dot Design Awards (by Design Zentrum Nordrhein Westfalen in Essen, Germany). What the five designers have in common is that their designs are warm-hearted, witty and interactive.

A good example of the interactive work on display is a digital installation Seol created for a Nike store in 2008. The installation employed a touch screen with an image of figure skater Kim Yu-na that was responsive to the viewer’s touch. When people touched the screen, Kim, who was stretching in the background, would approach the screen, put her hand up to it and say “Can you feel my passion?” This gave viewers the impression that they could communicate with Kim through the screen. Seol received numerous awards for the work. 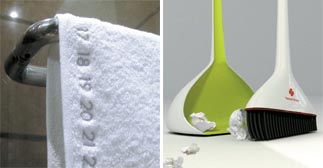 Left: This towel by Jeon Jin-soo enables its users to measure their waists. Right: This broom and dustpan designed by Song Won-june also functions as a vacuum cleaner.

The exhibit also includes a poster by Yi that was used as a public service ad for the U.S.-based Natural Resources Defense Council. The work originally appeared on the side of a building and was created to raise awareness to the dangers of air pollution. It shows a gun, placed underneath a chimney pipe and pointing upward. The butt and body of the gun comprise the main image on the poster. The chimney pipe forms the barrel of the gun as it points straight up to the sky. Yi received a gold medal for the work at the One Show Festival in New York in 2007.

Also on display is Park’s “Voice Stick,” which earned an IDEA silver medal in 2008. The device, created for the blind, transposes Braille into sound. Another of Park’s designs entitled “Energy Seed” is a lamp powered by dry-cell batteries.

“What it looks like doesn’t matter that much. The most important thing in design is that your true message is delivered through the design,” Yi said.