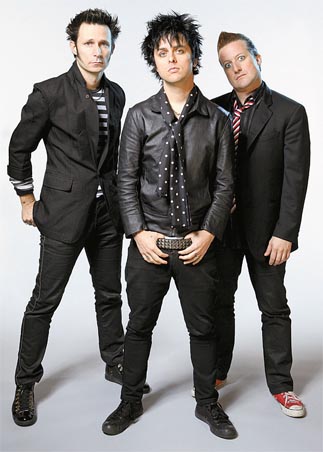 American rock superstars Green Day will perform in Korea for the first time this month. Provided by Access Entertainment

Some things in life just keep getting better - or bigger. That seems to be the case with Green Day and the seemingly boundless scope of their creativity.

It’s been 23 years since the American rock trio was formed, but the band just keeps making headlines with their music and an increasingly long list of other achievements.

In September last year, the band adapted their 2004 album “American Idiot” into a musical. The show premiered at the Berkeley Repertory Theatre in Berkeley, California, the band’s hometown, and ran for eight sold-out weeks. This March, the musical will premiere on Broadway with the opening date set for April 20, according to an announcement by the show’s producers last week.

The so-called Green Day art project was launched last October. As part of the project, supported by the band and led by their manager Pat Magnarella, a gallery in London hosted an exhibition of art works that had been inspired by each of the tracks on “21st Century Breakdown,” the band’s latest and eighth studio album, which was released in May last year.

Recent reports also say Green Day will soon be entering the video game world when they launch their own version of “Rock Band.” The music video game, launched in 2007, allows players to simulate the performance of popular rock music songs. “The Beatles: Rock Band” was released in September last year. The Green Day version is due for release this year.

The band’s explorations of their many talents may be keeping them busy, but they are still touring.

This month, Green Day will come to Seoul for their first concert in this country. Fans who have for years rocked along to hits like “Basket Case,” “Welcome to Paradise,” and “American Idiot” will finally have the chance to hear them live.

The concert is part of the “Super Concert” series organized by Hyundai Card, which has invited high-profile artists such as Billy Joel, Placido Domingo and the Vienna Philharmonic Orchestra, among others, to perform in Korea since last year.

And while popular foreign musicians who have been part of the series have more often than not showed up extremely late for their own concerts - 30 minutes to more than an hour in some cases - prompting a fair number of complaints from audiences, Green Day has vowed to appear on time. Helping them keep that promise will be opening band Prima Donna, which is scheduled to go on an hour before Green Day is scheduled to appear, according to Hyundai Card officials.

After the Korea concert, the band’s busy schedule continues. They are slated to perform at the Grammy Awards on Jan. 31.

Green Day have won three Grammy Awards, including Best Alternative Album for “Dookie” (1994), Best Rock Album for “American Idiot” (2004), and Record of the Year for “Boulevard of Broken Dreams” (2004).