Kang not guilty in Assembly ruckus

Kang not guilty in Assembly ruckus 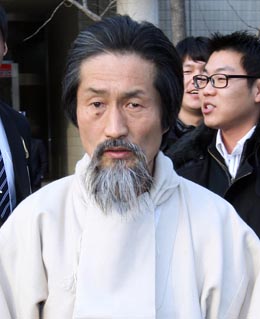 An opposition lawmaker charged with obstruction of justice for alleged misconduct at the National Assembly was found not guilty yesterday.

In January of last year, Kang was among opposition legislators that staged violent protests against the ruling Grand National Party’s decision to lock out legislators from the main opposition Democratic Party and the Democratic Labor Party.

Kang burst into the office of Park Kye-dong, the National Assembly’s secretary general, and stormed through the office, flipping tables and chairs. Kang also tried to enter the office of Speaker Kim Hyung-o.

The court yesterday ruled that while there may have been some violent acts, it didn’t qualify as obstruction because Park was only reading a newspaper at the time.

“The accused at the time was not in control of his emotions,” said the judge Lee Dong-yeon. “It’s difficult to establish that the accused had the intention to inflict harm. Also, his yelling and kicking at doors can be seen as his act to represent his party’s stance.”

Kang said he was “satisfied” with the result.

“It was a wise and a just decision,” he said. “I’ve been at many trials and I haven’t seen a judge as on top of the case as this one.”

Other opposition lawmakers who caused havoc in the National Assembly had received varying degrees of punishment. Moon Hak-jin of the Democratic Party was fined 2 million won ($1,780) for tearing down an office door to protest the passing of the Korea-U.S. FTA ratification bill. Another party official was sentenced to 10 months in prison with two years of probation for assaulting a Grand National Party legislator.

Prosecutors said the court’s interpretation of obstruction of justice was incorrect and they would appeal the ruling.