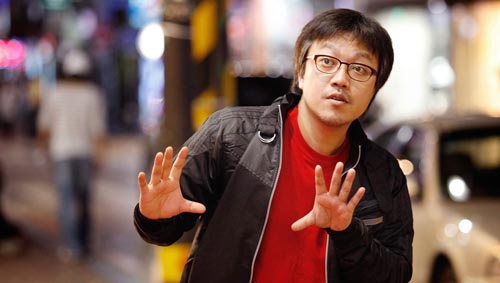 James Cameron’s masterwork “Avatar” is currently in high favor with moviegoers, but it is not the only movie that’s doing well at local box offices. The Korean action flick “Jeon Woo Chi: The Taoist Wizard” has also become a commercial success, attracting more than 5 million viewers in less than a month after its release on Dec. 23.

The movie, which is based on the classic Korean novel “Jeon Woo Chi,” may not have the spectacular special effects and computer graphics that Avatar does, but the imaginative story featuring a legendary Korean anti-hero seems to be attracting moviegoers, critics say.

Director Choi Dong-hoon, 39, who is known for movies such as “The Big Swindle” (2004) and “The War of Flower” (2006), said in a recent interview that with Jeon Woo Chi, he wanted to show something different from his previous works. Following are excerpts from a recent interview with Choi.

A. I wanted to enjoy making this movie as much as viewers would enjoy watching it. In fact, after my mother-in-law watched the movie, she said that if Avatar is a ferocious lion, then my movie is like a cute cat, and I think it’s an appropriate metaphor.

What characteristics about Jeon Woo Chi were so appealing to you?

I like classical literature. When I was a child, I read books such as “Memorabilia of the Three Kingdoms” quite often. I came across the book “Jeon Woo Chi” one day and wondered why it hadn’t yet been made into a movie.

I was drawn to the fact that Jeon Woo Chi is not a superhero, but a cheerful anti-hero, which makes him even more interesting. I wanted this movie to be more fable than fantasy, like Harry Potter, so I included scenes where Jeon Woo Chi rides on clouds and a dog transforms into a human being.

It was interesting to see elements of Asian fantasy in the movie, such as animals in the Chinese zodiac turning into ghosts and monsters.

Korea is fortunate to have such invaluable assets in its classical literature. The character Jeon Woo Chi always carries a charm against evil, just as a cowboy from a Western movie would always be armed with a gun. In that way, I wanted to combine Eastern and Western elements in the film. I also wanted to show aspects of Taoism that still exist in Korea.

Taoist magic uses illusions, an element that movies also use. So, just as the magical arts made the impossible possible, special effects and CG effects are doing that for films.


How did you use computer graphics and action sequences?

Jeon Woo Chi used 1,400 CG shots, which is the largest amount used in a Korean movie to date. But it’s not really apparent because I tried to mask the CG effects as much as possible. The opening scene where Jeon Woo Chi comes down from the sky on a cloud and the shot where 10 Jeon Woo Chis fight against each other were all done in an “analog” way, so to speak. I did it that way because even though they don’t look as perfect or smooth as when special effects are used, they create a unique atmosphere.

You’ve said that inspiration for the movie came from actor Gang Dong-won.

I usually work with actors with theater backgrounds because of my belief that they are good at acting, but Gang Dong-won [who plays the title character] has changed my views on acting and actors. Some actors are gifted in acting, but there are also actors [like Gang] that are just fascinating to watch.