Actresses show the substance behind their style

Actresses show the substance behind their style 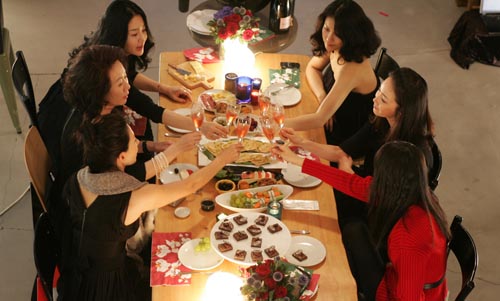 The notable thing about director Lee Jae-yong is that he always seems capable of achieving a smooth balance between the experimental and giving the public something they are comfortable with. In his latest film “Actresses,” Lee features six of the country’s top leading ladies in one big Vogue fashion shoot, with a delicious catfight squeezed in. He wraps a classic plot about beautiful women faced with insecurities, rivals and aging inside a deceivingly edgy “mockumentary” format.

The actresses, ranging in age from their 20s to 62, play themselves - or do they? At first, the movie seems to confront the mystery surrounding actresses in general by exposing them as “themselves.” As the film progresses however, the line between our own perceptions about these women and their supposed “real” selves begins to blur.

Take Choi Ji-woo, for example. The 34-year-old has played the innocent star-crossed lover in many a TV drama, including the massive hit “Winter Sonata” (2002). Doing a complete 180 with this film, she plays an all-out diva, and tries to sneak her personal masseuse into a dressing room that she doesn’t share with any of the other actresses. Is this a deliberate transformation on her part to show us her range as an actress? Or is this a bit of the real Choi as seen through the eyes of the director?

The film’s showstoppers are the three eldest actresses, Yoon Yeo-jeong, Lee Mi-sook and Ko Hyeon-jeong, who deliver the wittiest lines and the most natural performances. Given the fact that the director has said most of the film was improvised, their self-deprecating humor and wit shines through all that much more.

In one scene, Choi says she envies Korean actress Song Hye-gyo for her popularity in the Japanese and Chinese markets, and Yoon replies, “Well then, I’ll just have to maintain my popularity in the jerae [flea] markets.”

Ko’s role in the film seems to be a delicate balancing of the bully and the jester, as she picks a fight with Choi and drinks too much Champagne. It’s a refreshing take on Ko, who made news for her divorce from a high-profile jaebeol (conglomerate) magnate.

Through their attempts at being “real,” the actresses in fact become much more intriguing to audiences than the often two-dimensional people we see, whether in the tabloids or the mediocre TV drama roles they are famous for. By playing themselves unscripted, their depth as individuals, and as performers, becomes more tangible.