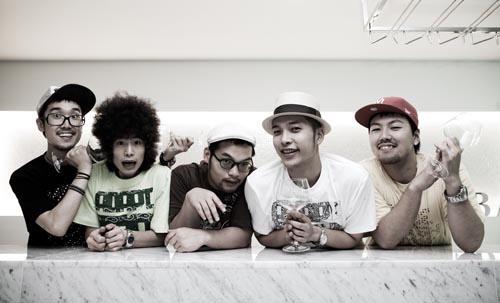 Korean indie band Super Kidd will perform along with other bands this Saturday at Rolling Hall. The concert, called AYITI 7.3, will raise money for the people of Haiti. See MUSIC. [JoongAng Ilbo]

Friday: “Zion’s First Live Concert: Sweet Butterfly.” Zion first became known to Korean audiences after winning a competition to sing a duet with ballad singer Jo Sung-mo in 2001. She beat out 3,000 other contestants to win.

After working with Jo, she trained as a singer with Korean diva Lee Eun-mi for two years.

In October 2006 she shined as the opening act for hip-hop superstar Jay-Z’s concert in Korea.

Her concert this Friday, called “Sweet Butterfly,” serves as a metaphor for Zion’s many transformations and her growth as a singer over the years.

Zion will be joined on stage by other artists such as Vanilla Acoustic, Ernest and Accordance.

Saturday: “AYITI 7.3.” Korea’s indie bands are coming together to help the people of Haiti with a charity concert on Saturday.

Popular bands in the indie world such as Transfiction, Prana, Super Kidd and Nemesis, along with others, are scheduled to perform for seven straight hours.

All profits will go to Unicef to help people in need in Haiti.

There will also be a raffle giving concertgoers the chance to win one of three guitars.

In the Chamber Music Gala, Gum will be narrating a selection of the most popular pieces from the weeklong festival.

Prelude has been making a name for themselves worldwide. They performed in the Asian-American Jazz Festival in Los Angeles last November and have participated in many other music showcases.

Prelude was founded in 2003 by six graduates of the Berklee College of Music in Boston. Their goal in forming Prelude was to let Koreans know just how much fun jazz music can be.

The concerts will consist of romantic songs like “Tango Apasionado,” which was on the sound track of the film “Happy Together,” directed by renowned Chinese director Wong Kar-wai. They will also perform “Merry-go-round of Life” from the sound track for the film “Howl’s Moving Castle.”

To Feb. 28: “Two Old Thieves” When two thieves who have spent more than half their lives in jail are released in a general amnesty, they have to figure out a way to eat and make a living.

They decide to join forces to carry out one last robbery - this time at the house of a wealthy and prominent man. The owner of the house has many priceless works of art in his possession, but the thieves are ignorant of their value and instead search for the owner’s safe.

While they reminisce about their lives and work on breaking the code for the safe, they are caught by a guard dog. As the two old thieves attempt to make their way out of the unfortunate situation, a hilarious scene ensues.

The play is directed by the Kim Ji-hoon, the director of the movie “May 18.” Kim has created his own interpretation of the play, which has been loved by the public for two decades.

The 20th anniversary of the first production of the play was in 2009. Since then, the play has been making the rounds to different venues around Seoul. It will be at COEX through the end of February.

Ko is best known for his role as Hojae, the leader of the Hwarangs - the elite military group of young Silla men - in the MBC hit drama “Queen Seondeok.”

Do Dream Love is about a difficult eight-year-long romantic relationship between Myeong-hoon, a struggling musician played by Ko, and movie promoter Su-hui.

Due to many problems the couple faces, the couple eventually decide to end their marriage.

In the midst of the divorce, Myeong-hoon stumbles upon a magical theater that promises to obviate all memories he has of Su-hui.

The musical premiered in 2008 and Ko joined the cast in its encore performance this year.

From Tomorrow: “Beautiful Sunday.” Actor Jeong Il-woo will make his stage debut in this play as a gay man who is also HIV-positive.

Based on the work by Japanese playwright Nakatani Mayumi, “Beautiful Sunday” was first staged in Korea in 2006 and has been presented more than 450 times thereafter.

Jeong plays Jun-seok, a gay art student in love with Jeong-jin, who is the manager of a family restaurant.

The play takes place on a Sunday, when a heartbroken female stranger breaks into the couple’s apartment.

It received rave reviews from critics.

Performances are Tuesdays to Fridays at 8 p.m. and Saturdays and Sundays at 3 and 7 p.m. There are no performances on Feb. 16 and March 2.

The story stretches over 17 years and begins when Esme finds out her only daughter, Amy, is pregnant by her boyfriend, Dominic. Although Amy asks her mother to keep it a secret, Esme, unhappy with Dominic’s lifestyle, tells him about Amy’s baby.

Choi Young-hoon, the current artistic director of Arko Arts Theater, directs and the role of Esme is played by Yoon So-jeong, one of Korea’s most praised stage actresses.

Feb. 19 to 20: “La Boheme.” This beloved Puccini opera will be staged here by the Seoul Opera Ensemble, a group which has worked to bring opera to the public for over 15 years.

It is a story about the loves and lives of the young artists who began the countercultural revolution that became associated with the term “bohemian.”

To Feb. 15: Gangwon’s third annual trout festival, “Snow, Ice and Trout ? A Winter Story,” provides a variety of winter activities. The festival’s main event, however, is fishing. Fishing poles can be purchased on the spot and visitors are invited to taste the freshly caught trout.

The cost to participate in ice fishing ranges from 10,000 won to 30,000 won and visitors can win prizes during fishing events.

Activities for children include ice skating, sledding, riding four-wheeled ATV motorcycles and more. There will also be family-oriented activities such as sledding and top-spinning.

To Feb. 15: Boseong County continues its seventh annual lights festival with the lighting of the giant tree.

The tree, 120 meters (394 feet) in height, 160 meters in width and displaying 1.5 million white lights, is the hit of the festival, which has been extended until Feb. 15 from its original closing date of Jan. 31.

Along with this giant attraction, other features such as the Milky Way Tunnel, photo breaks and roads decorated by beautiful bright lights are set up for family and friends to enjoy.

To Feb. 15: This winter festival at Para Lake provides visitors with end-of-the-season fun for the whole family. Visitors can fish for trout and smelt in the beautiful icy lake and children can go on sled rides.

Regional specialties are offered with fresh ingredients from the area.

Other activities such as ice golfing, a nine-hole course on ice, and curling, a winter sport in which a broom is used to push a rock over the ice, can be enjoyed as well.

To get to the festival, take a bus from Dong Seoul Bus Terminal at Gangbyeon Station on line No. 2 to Chuncheon. From there, take a bus to Yuchon-ri.