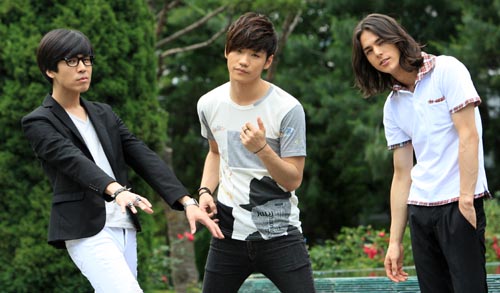 Thursday: “Valentine’s Day Jazz Concert.” Bring loved ones, friends and chocolates and join the Lee Han Jin Band and Break Band for an unforgettable night of uplifting music and fun.

The Lee Han Jin Band released “Devotion” in 2003, a gospel album peppered with funky jazz rhythms and tunes. They’re known for incorporating jazz trombone and recently added a new vocalist. The stage will also be packed with the 22 musicians of Break Band, a pop orchestral group who are known for meshing big band instruments along with other classical ones.

Friday: “Oriental Lucy’s Midnight Hotel EP Release Party.” Celebrate the release of Oriental Lucy’s EP and party with the group that is considered to be among the top acts in Seoul’s underground music scene. Other indie bands such as Witches and Cheez Stereo will also be thrown into the mix.

Originally called 24Caution, Oriental Lucy officially became a group in 2004 with vocalist Yeon Su-hee and guitarist Kim Hyun. After they changed their name in 2006, they quickly established a fan base with their infectious and emotion-packed rock and roll music.

Yeon is known for her strong vocal range on tracks such as “Rorina Homestay” and “Butterfly Kiss” from their previous albums. Now, they have replaced their rhythm section with a keyboard and laptop artist and recorded “Midnight Hotel” which adds an electro-pop twist to the band’s sound and matches Yeon’s vocal style.

Friday: “Love Concert.” Get in the mood for love with six of the most talented and attractive Korean artists and musicians for a special Valentine’s Day concert.

The line-up includes Kim Jeongwon on the piano, Kim Soovin on the violin, Kim Sangjin on the viola, Song Young on the cello and accomplished piano composer Yiruma.

Each of them will perform pieces by renowned classical composers such as Liszt, Brahms, de Sarasate and other contemporary works.

Yiruma is an internationally renowned contemporary composer, and his albums are sold all over Asia, the U.S. and Europe. His most well-known pieces are “River Flows in You”, “Love Me” and “Kiss the Rain.”

The concert will take place at 8 p.m.

Feb. 26 and 27: “With Mate.” The Korean all-male trio Mate strays from the conventional K-pop boy bands and brings indie-philes what they want to hear most with rock and fun.

They’ve won several awards in the past, and wrote and produced all of their music off of their 2009 release “Be Mate.” Their infectious single, “It’s Alright” has been a hit among pop fans. Helping them skyrocket into popularity, they sold out their first solo concert in four hours and their second show in just six minutes.

Be Mate shot up to the No. 1 spot on the rock album sales chart, and they also won the “male rookie” award at the 16th Korean Entertainment Art Awards. Mate have also performed at the Jisan Valley Rock Festival and Grand Mint Festival.

Their drummer, Lee Hyun-jae has also been receiving a lot of attention after he was chosen to model for a clothing brand that other celebrities such as Kwon Sang-woo, Goo Jun-pyo, Lee Min-ho and Se7en have modeled for in the past.

Today: "Pan," meaning open stage, ruckus or celebration, is a performing arts piece directed by Kim Duk-soo, one of the most revered gugak, or traditional music, performers in Korea.

The show opens with "Chukwon," an invocation rite in which performers wish for a successful show, and to bring happiness and fortune to their audience. The performance continues with "Ilgohwarak," a percussive performance where various drums are played in harmony, creating thunderous beats while the female drummers dance. Other musical acts include a pansori excerpt from “Simcheongga,” one of the five surviving pansori suites, before the show closes with "Pan Noleum," where parts of the previous performances are thrown together to create one final performance.

Pan is a performance for the common people and contains the most traditional Korean plays where masked performers play music, dance and act in a wide and open space.

Spectators can cheer phrases such as "jota" or "eolssigu" ("good" or "wow") to participate, and the performers respond to their cheers, which is typically seen in traditional Korean plays where everyone can interact with one another.

Since his younger days, Kim has played the janggo (hourglass drum) and at seven years old in 1959, he participated in the "National Farm Music" contest and received a presidential award. He was taught by several famous teachers and he also had participated in the world tour performances as a member of professional traditional culture and arts group. His burgeoning career led him to form the Samulnori Group and in 2007, on the 50th anniversary of the group, he received the Silver Cultural Decoration of Korea and also Fukuoka Asian Culture Award in Japan.

He is currently an art director of Samulnori Hanullim and a professor at Korean National University of Arts.

The performance starts at 8 p.m. on Tuesdays through Fridays and 2 p.m. on the weekends.

Feb. 19: “Rainman.” Based on the Academy Award-winning film, "Rain Man," which stars Tom Cruise and Dustin Hoffman, producers Song Han-saem and Park Sang-yun have managed to translate this drama for a Korean audience.

The original tells the story of an abrasive and selfish yuppie, Charlie Babbitt, who finds out that his estranged father has died and left his multimillion-dollar estate to his autistic son Raymond, of whose existence Charlie was unaware until now.

Feb. 27 to Mar. 21: “Yi.” Five years after the hit film "The King and the Clown," "Yi," the original play upon which the film was based, will mark the 10th anniversary of its premiere.

It was first staged in 2000 and writer Kim Tae-woong centers the story around the relationship between a tyrant king of the Joseon Kingdom, Yeonsan; his favorite court jester, Gong-gil; and clown leader Jang-saeng.

The story touches upon the homosexual relationship between the king and the clown, who possesses feminine traits that the king is attracted to.

Original cast members, such as Kim Hae-na Oh Man-seok, Chung Seok-yong and Lee Seung-hun, will also be returning to the stage.

After it won many awards in 2000, the play was then adapted into a film which starred Korean wave star Lee Jun-ki.

The shows begins at 8 p.m. on weekdays, 3 p.m. on Saturdays and 7 p.m. on Sundays. During the holidays, the performance will run at 2 and 6 p.m. There are no performances on Mondays or March 2.

Feb. 26 to 28: “Jeongwol Daeboreum Fire Festival.” This annual festival takes place around the Lunar New Year to pray for good health and harvest for the coming year.

The three-day event offers a number of hands-on events where visitors can participate in folk games and traditions, including the Jeju Citizens’ Great Unity Tug-of-War, a folk music instrument parade and a moon house-making competition.

There will also be a Torchlight March, which happens at sunset on the first day, and the participants will pray as they walk around the festival grounds holding lit torches. At the end of the Moon House competition, a fireworks and laser show will accompany the event.

From Jeju International Airport, take a taxi or airport limousine (buses run every 15 minutes) and get off at Saebyeol Oreum.

The celebration begins in the afternoon of the full moon day and lasts until midnight. The festival includes traditional folk games like yut (Korean-style board game), tuho (throwing an arrow into a cylindrical container) and jegichagi (shuttlecock game).

The events include a mask play, farmers’ dance, treading on the earth to drive away bad spirits, ceremonial moon-viewing ritual, and the lighting of bonfires.