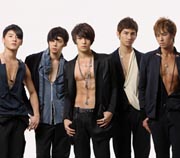 Despite their ongoing dispute with their management company, popular boy band TVXQ has still got it.

Japanese entertainment company Oricon reported on Feb. 2 that TVXQ’s 29th single “Break Out” had sold over 256,000 copies since its release on Jan. 27 and predicted that the song would still be No. 1 by the time its new rankings are released on Feb. 8. According to Oricon, that breaks the record for number of albums sold in the first week after its release. The record was previously held by Elton John, whose single “Candle in the Wind” sold 184,000 copies in Japan in the first week after its release.

Three TVXQ members - Xiah Jun-su, Micky Yoo-chun and Hero Jae-joong - have been in the middle of a contract dispute with their management agency, S.M. Entertainment, since last summer.