Start training for the movies

Start training for the movies 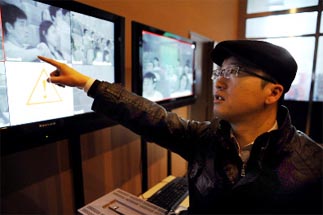 If you are a movie fanatic and think you can stay awake for hours on end without nodding off, you may just be a perfect candidate for CGV’s 2nd Movie Watching Marathon, which starts on Feb. 23.

CJ CGV, a local movie theater chain and the event organizer, said Tuesday that this year’s zany event will get even zanier with more ways for people to compete.

“In addition to competing as individuals, people can pair up as a couple and compete together. Groups of between four to six people will also be allowed,” said Kim Dae-hee, the CJ CGV official who is in charge of the event. But beware - if any one person in your group snoozes, the whole group goes down.

The rules are the same as they were last year. If you close your eyes for more than five seconds, you are disqualified. When a film is in progress, conversation and other activities that could prevent other participants from watching the movie are strictly prohibited. The use of mobile phones, MP3 players, medication, health patches and caffeine is not allowed. That means no soda or coffee, but bottled water, chewing gum, candy and other sugary snacks are all perfectly acceptable. The theater provides meals during breaks.

It’s tough, and there is no cheating allowed, including the creative methods for staying awake that eager competitors tried last year.

There will be about 200 staff members on hand to monitor the 310 participants. They will be stationed in the theater and in an observation room nearby, where a number of cameras have been installed for the competition.

The competition will be held at CGV Yeongdeungpo in western Seoul, and around 40 Korean films will be shown. The event organizer said it chose Korean films released last year to raise awareness about Korean film.

“It will be a good chance for people to watch almost all of the Korean films released last year in one spot,” Kim added.

The films will be shown with breaks of 10 and 15 minutes in length between screenings. Participants can use the breaks to eat meals, replenish their snack supplies or use the bathroom. Anyone leaving during a film will be disqualified.

At last year’s competition, two people tied for first prize: Lee Su-min and Lee Sang-hoon. They each won 2.5 million won ($2,157) and a certificate from the Korea Record Institute.

This year’s winner will have to beat the record they set: 68 hours and seven minutes of movie watching.

When asked for tips on how this year’s participants can survive, Kim said, “The staff say that the hardest moment comes every 12 hours, but that in the end, the most important thing is the strength of your mind,” Kim said.


To participate in the 2nd CGV Movie Watching Marathon, go to http://www.cgv.co.kr (Korean only). Potential competitors need to leave a note on the site’s bulletin board explaining in 500 words or less why they should be one of the 310 participants allowed to compete. The deadline for entry is Feb. 15. First prize is 2 million won and a laptop computer. Second prize is 1.5 million won and third prize is 1 million won. The event is open to both Koreans and non-Koreans.

If you would like to apply:
- Direct your Web browser to http://www.cgv.co.kr
- Log in, or register for the CGV Web site by clicking on "Registration for Foreigners" after scrolling to the bottom of the page.
- At the bottom of the home page's main box (labeled either "Event," "Movie," or "Magazine") click on any of the icons along the bottom - a movie camera, or the silhouettes representing one, two, or multiple participants.
- On the next page, click anywhere in the box with the images of the laptop or movie tickets.
- Once again, click anywhere in the box with the four shifting boxes labeled one through four.
- A pop-up box should appear. Click on 개인전 for individual registration, 커플전 for couples and 단체전 for groups of up to 6.
- Fill in the subject line and text box below with up to 500 words about why you should be a participant in the movie marathon.
- Should you encounter any problems, you should probably ask a Korean friend for his or her assistance. Good luck!