A movie theater for the senior set

A movie theater for the senior set 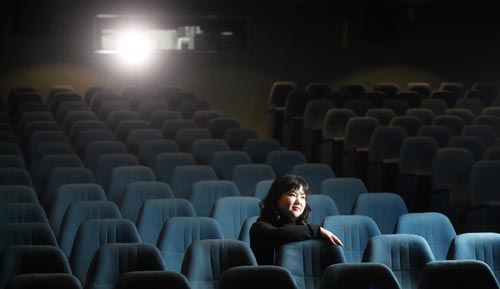 Kim Eun-joo, 36, the president of the Silver Theater in central Seoul, oversees the operation of Korea’s only theater for the senior citizens. By Jeong Chi-ho


The number of senior citizens flowing in and out of the aging Nakwon Arcade in central Seoul has noticeably increased over the past year. The multistoried musical instruments mall is not a typical destination for the elderly and generally frequented by underground rockers looking to purchase a new Gibson electric guitar or aspiring musicians looking for their first violin.

On most mornings and afternoons, a sizeable group of moviegoers in their 60s to 80s flow out of the small elevator connecting the entrance on the ground level of the Nakwon Arcade overpass and the fourth floor where the Silver Theater, formerly known as the Hollywood Theater, is located. While waiting for their chosen film to start, groups of seniors linger over tables set up in the lobby, where film posters of Hollywood classics such as “The Godfather,” “Gone with the Wind” and “The Mission” are prominently displayed on the walls. Meanwhile, Kim Eun-joo, 36, the president of the Silver Theater, weaves through the crowd, chatting or providing assistance. 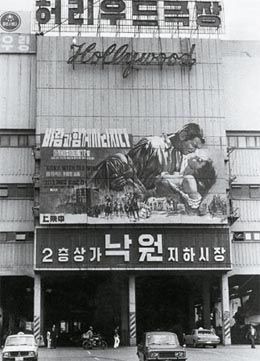 The Silver Theater is a rarity in Korea. It is the only theater catering to the interests of the 57-and-over age group and shows a mix of Hollywood films and Korean classics, with a few select new releases occasionally thrown into the mix.

“It’s good to know that there’s always a place where I can go and enjoy a good film,” said Lee Duk-soo, 68. “It doesn’t really matter to me what film they are screening, I like the atmosphere and the employees are kind and friendly.”

Although the Silver Theater was created for seniors, and the employees attempt to cater to the needs of this age group, the theater attracts visitors of all ages.

“This is my second visit and I enjoy coming here,” said Kwan Min-sun, 30, of Incheon. “I go to the movies often but I like to come here every now and then for classic films. It’s far, but it’s definitely worth the trek.” 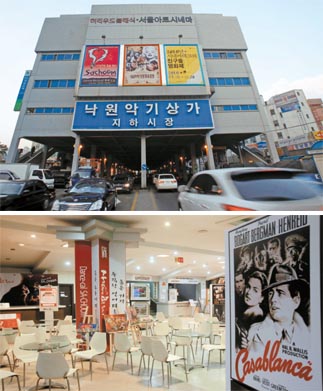 The current day Nakwon Arcade, where a Silver Theater billboard is prominently displayed in the middle

While the theater attracts pockets of the younger crowd, it is clearly not for everyone. The screenings are often delayed and many of the people from the senior set chat freely or walk in and out of the theater even after a screening has started.

According to Kim, senior citizens often have difficulty staying focused for an entire film and may go outside for breaks. That’s why the Silver Theater offers three consecutive screenings from 10:30 a.m. to 2:30 p.m., she says, and people are free to sit through all three screenings.

“We’ve had some youngsters who haven’t liked our relaxed screening schedule or the atmosphere. But senior citizens like us for exactly that reason,” said Kim. “Most seniors have trouble focusing on a film for an extended period of time. That’s also why we could never show a first-run film like ‘Avatar.’ We screened ‘Terminator’ and some romantic comedies last year, but it did not sit too well with our crowd.”

Some seniors find it difficult to get accustomed to new and unfamiliar things. For fans of the Silver Theater, which shows classic films, that’s part of the charm. 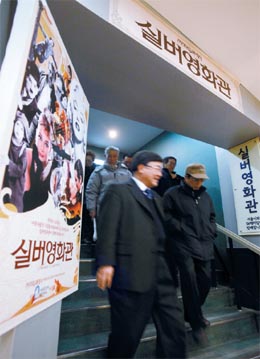 “The people who qualify as senior citizens now are part of the generation that survived the Japanese colonial years [1910-1945] and the Korean War [1950-53],” Kim explained. “There are also the Vietnam War veterans and a large number of construction workers who worked in the Middle East during the 1970s and ’80s. These people contributed a great deal to the economic surge Korea experienced in the past but they are largely ignored today.

“They lived through a time when earning a living was more important than cultural activities. For many of today’s seniors, going to the movies was a luxury. We provide our visitors a chance to watch the films they missed out on and reminisce about the past.”

Having celebrated its one-year anniversary on Jan. 28, what was once a struggling theater now has an average of 200 moviegoers filling the 300 seats in its screening room. Roughly 70,000 people visited the theater in its first year, a theater employee said.

While the Silver Theater has gained a solid group of followers over the past 12 months, the theater went through some hard times before the idea for the Silver Theater emerged. Having first opened its doors to the public in August of 1968, the Hollywood was once a popular destination among hip young people looking to take in the latest release. Over the years, the iconic movie theater was forgotten by the masses, who flocked instead to the glitzy new multiplex cinemas and giant IMAX theaters that were springing up all around the city.

The idea to screen classic films for the elderly happened by chance. Kim, a computer science major, worked for the Korea Electric Power Corporation upon graduating from university. She had always had an interest in film and her outgoing personality eventually led her to a marketing job with the Dream Cinema in central Seoul. She kept the job for seven years, during which time she really got to know the ins and outs of the field. Kim and her father, Kim Ik-hwan, purchased the Dream Cinema in 2004.

“We were doing okay until talk of redevelopment in the area in late 2007 pushed us to the brink of closure, so we did a screening of ‘Dirty Dancing,’ with a retro theme, complete with a painted billboard advertisement of the film and old-fashioned ticket stubs,” Kim said. “It was supposed to be the Dream Cinema’s last showing, but to our surprise, a large number of people came. It was a tremendous response.”

Although Kim and her father had purchased the Hollywood Theater in response to the news that the Dream Cinema was going to close, the redevelopment plan was changed and the Kim family was left with two theaters to operate. That’s when they came up with the idea of using their new venue to screen old films for senior citizens.

The experience of taking an aging theater and getting it back into shape was not easy. Kim needed funding to start the project. As Kim tells it, the theater - operated by Kim and her father with the help of five employees - costs 40 million won ($34,520) per month to operate but generates a mere 10 million won from ticket sales. That is largely due to the low ticket price of 2,000 won for those over the age of 57. Adults under the age of 57 are charged 8,000 won, which is the average ticket price at most other movie theaters in the city.

“We’re not in it for the profit,” Kim said. “We have many regulars here but one elderly man stands out in my mind. When he first started coming here, he kept to himself but over time, he’s become noticeably happier and more sociable. I feel happy knowing that we provide a comforting place where the elderly can socialize and get away from their daily routine.”

In order to make up for the lack of profit, Kim began looking for corporate sponsors that would be willing to provide the financial support needed to keep the theater running. Although she visited several large corporations, SK Chemicals was the only one to offer funding. The company, which is a subsidiary of SK Group, provided the theater with a grant of 150 million won last year, and it recently renewed the grant for another year.

This year, the city of Seoul also decided to support the theater with a grant of 300 million won. It made its decision after studying the theater for close to a year.

With the additional funding, Kim is planning to build a disc jockey booth with a record player in the theater lobby, where the theater will provide snacks during screening breaks and host art exhibitions featuring works by senior citizens.

The Seoul Metropolitan Government’s decision to fund the theater is part of its larger effort to provide for the city’s growing elderly population. According to the city’s Senior Citizen Welfare Division, senior citizens made up 7 percent of the city’s population in 2005, and the figure grew to 9.4 percent, or about 940,000, this year. It is expected to reach one million next year and account for 14 percent of the city’s total population by 2019.

As such, the city is currently taking measures to support its growing population of people who are over 65 with special programs for seniors.

In addition to its support for the Silver Theater, the city also organizes a series of open dress rehearsals tailored to the senior population at the Sejong Center for the Performing Arts and several other venues in Seoul.

Later this year, the city is planning to organize a series of free outdoor screenings of film classics at Tapgol Park and Jongmyo Shrine in central Seoul as well as other outdoor locales that are popular with seniors.

“We need to continue to improve our social and cultural programs,” said You Si-young, the manager of the Senior Citizen Welfare Division at the Seoul city government. “We are also helping to promote the Silver Theater through the 30 community relief or welfare centers around the city, and the reaction from the seniors have been very positive.”

Kim says that one of her goals is to create jobs at the theater for senior citizens by providing more services using the city’s sponsorship deal.

That’s in line with the city’s overall plan to support the elderly by providing them with more opportunities for employment.

“We have created 38,000 part-time jobs for senior citizens in the past few years and are looking to create about 600 more higher paying jobs this year,” You explained. “We are looking into hiring retired teachers who can teach disabled children, or hiring senior citizens to work as restaurant inspectors, among other options.”

Bae Ki-hyo, a sociology professor at Daegu University, added, “People who have retired or who are elderly often lose their sense of self-worth or significance in the society and that can lead to depression. Building cultural spaces and providing events for senior citizens works as an important preventative measure to help keep our senior population healthy.”